I went on this hike last weekend and to Yangmingshan the day before yesterday. Both were absolute highlights so I want to get these posts out before I’ve forgotten everything.

Alan had warned me about Wuliaojian, saying it’s much more intense than the two hikes we went on together, Chahushan and Huangdidian. He was right, this is an intense hike! He also said it’s not very convenient to get to by public transport. Since we arrived by car, I can’t speak to that but I didn’t notice a bus stop near the entrance to the trail we took. 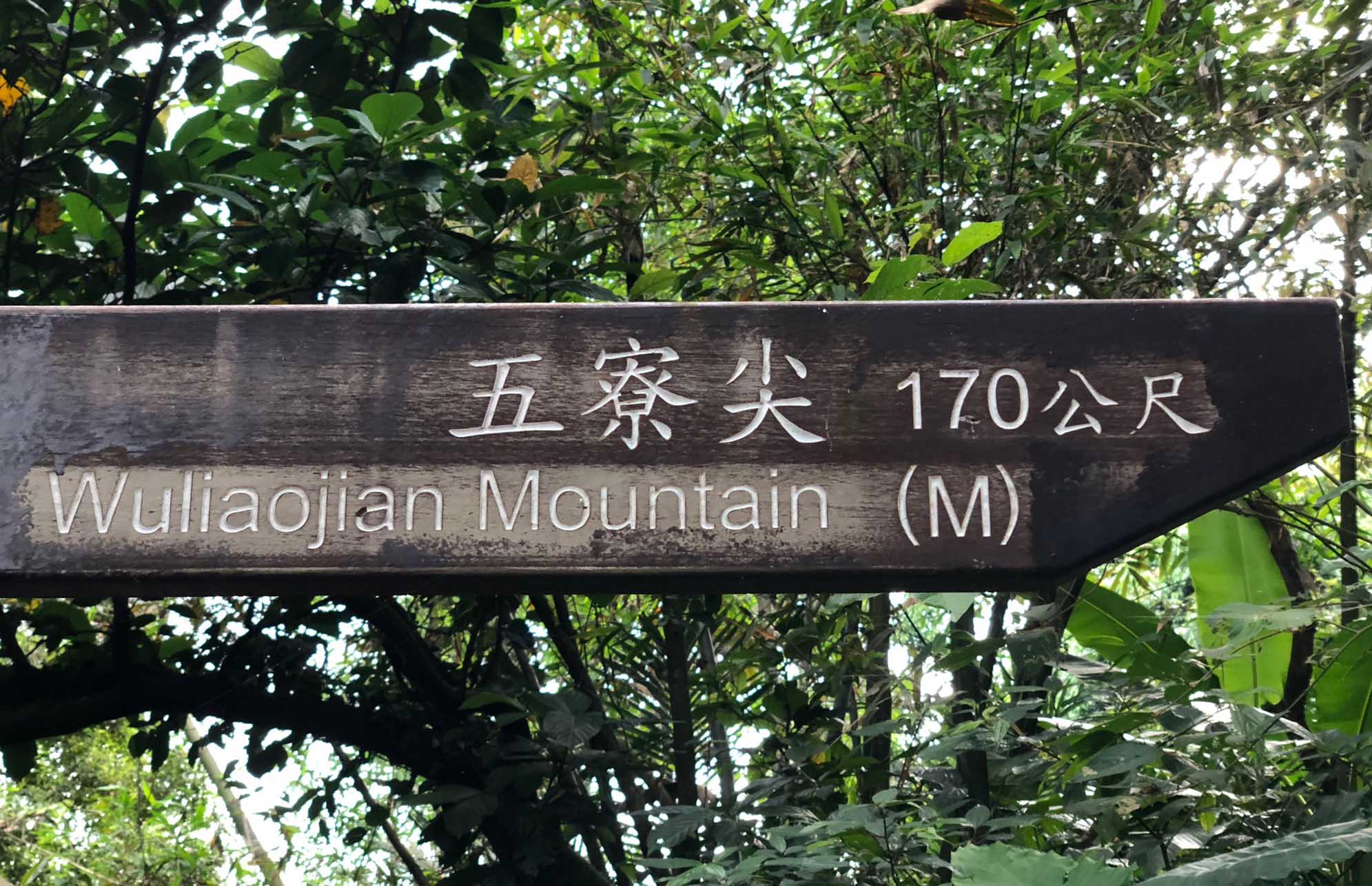 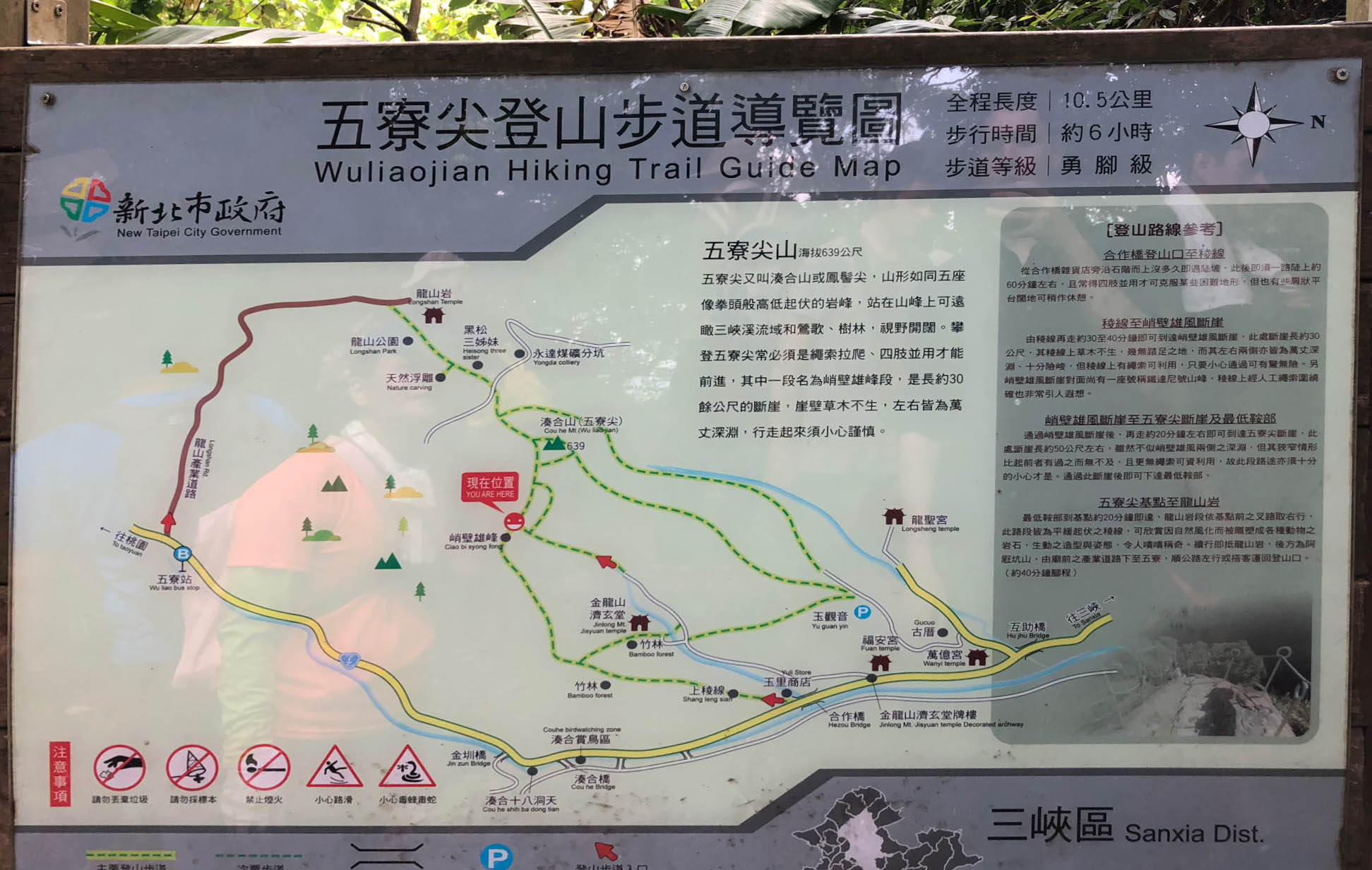 A map of the trails in the area.

We arrived at Yuli Shangdian (玉里商店), named after a shop that is right next to the entrance. The hike starts of nice but very quickly goes vertical with much time spent pulling yourself up on ropes. 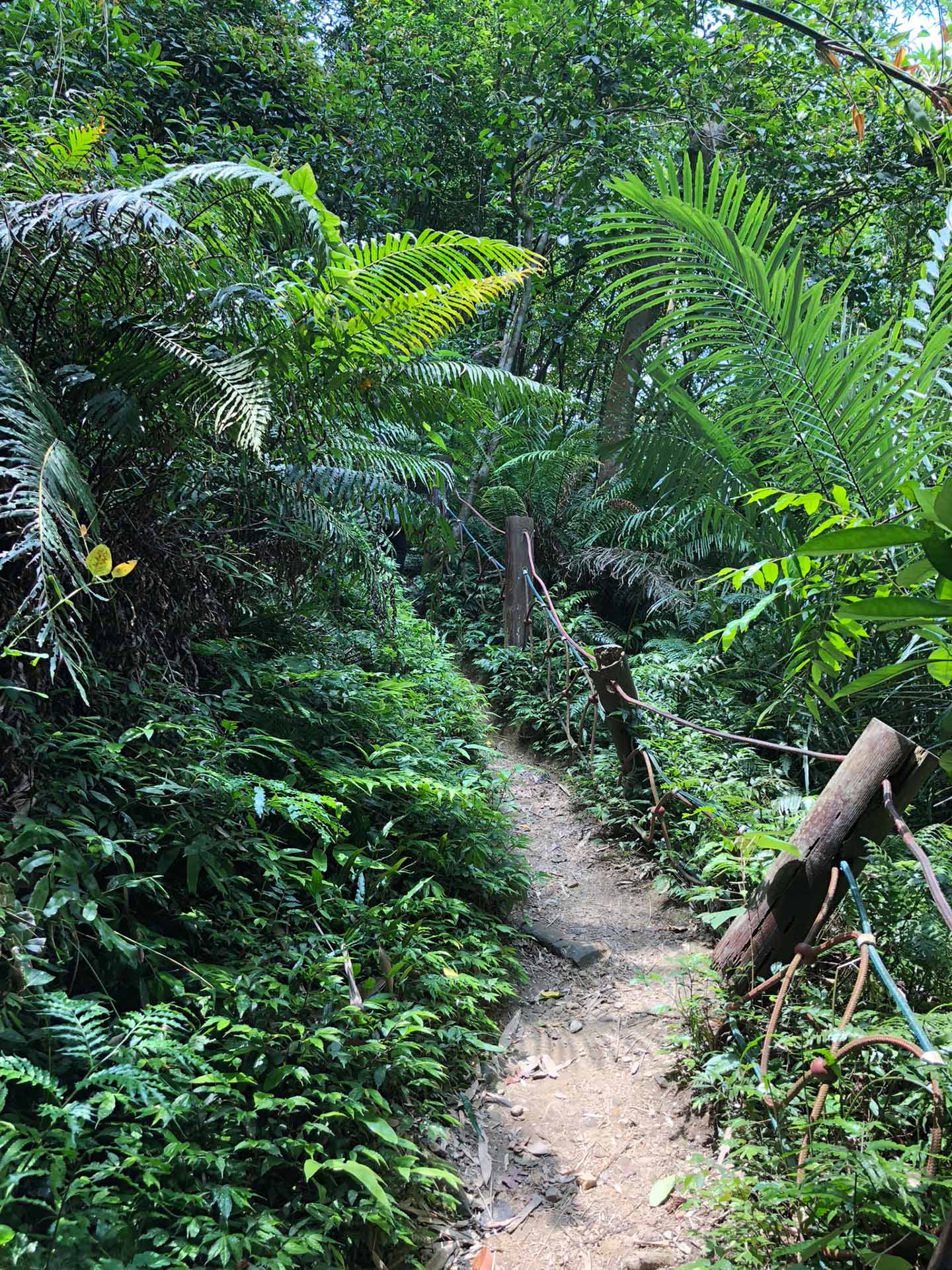 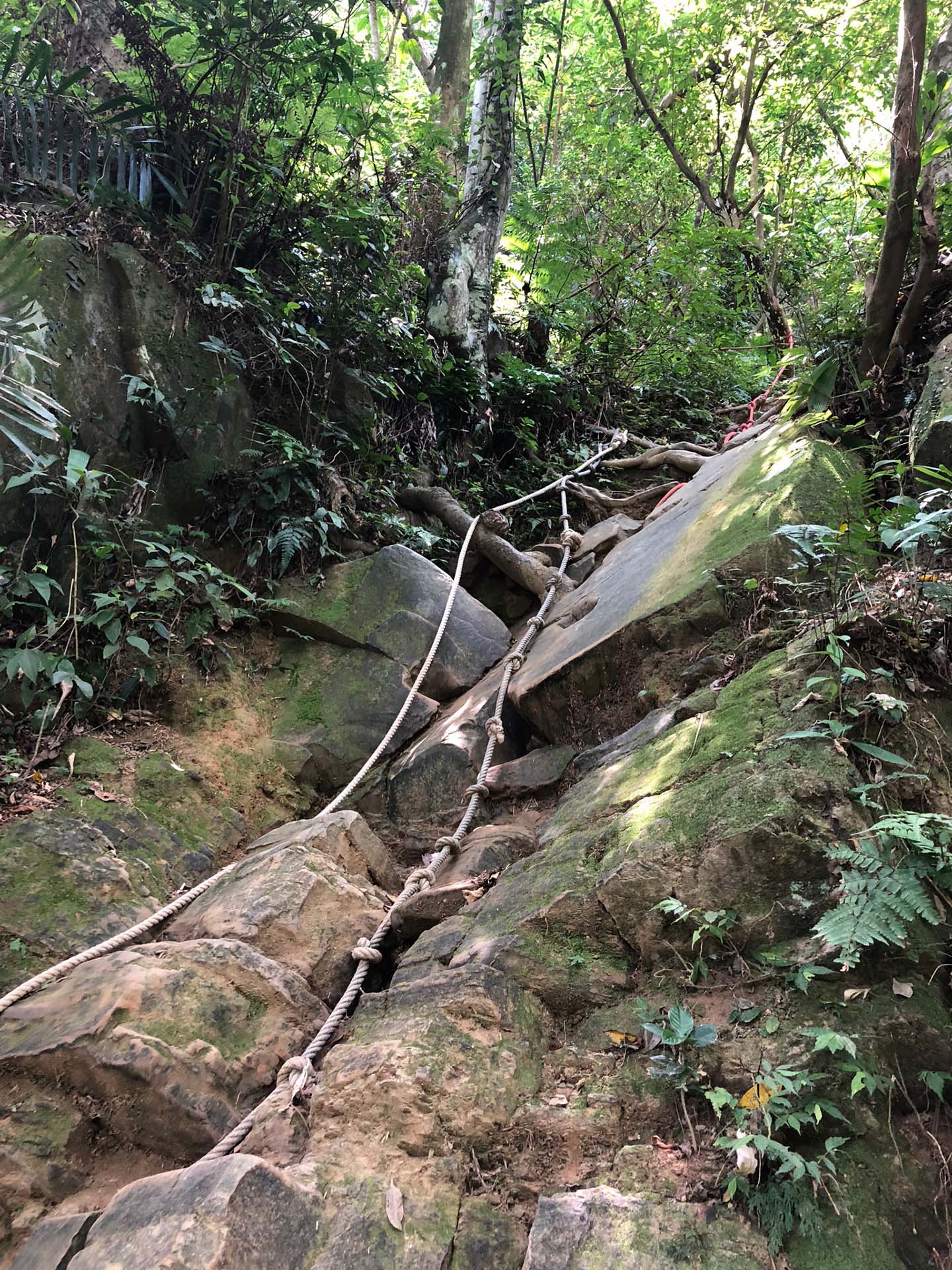 One of the easier climbs. 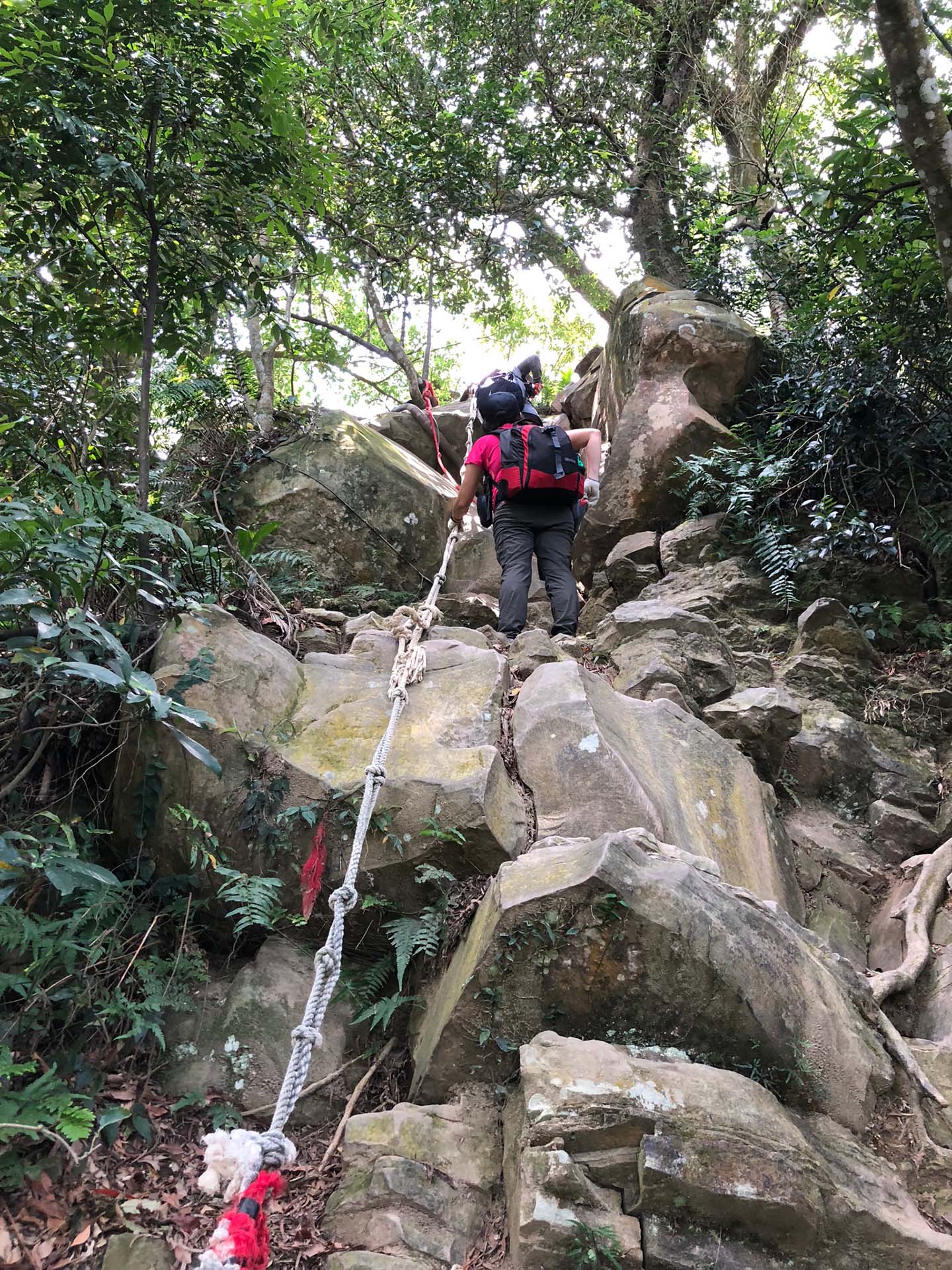 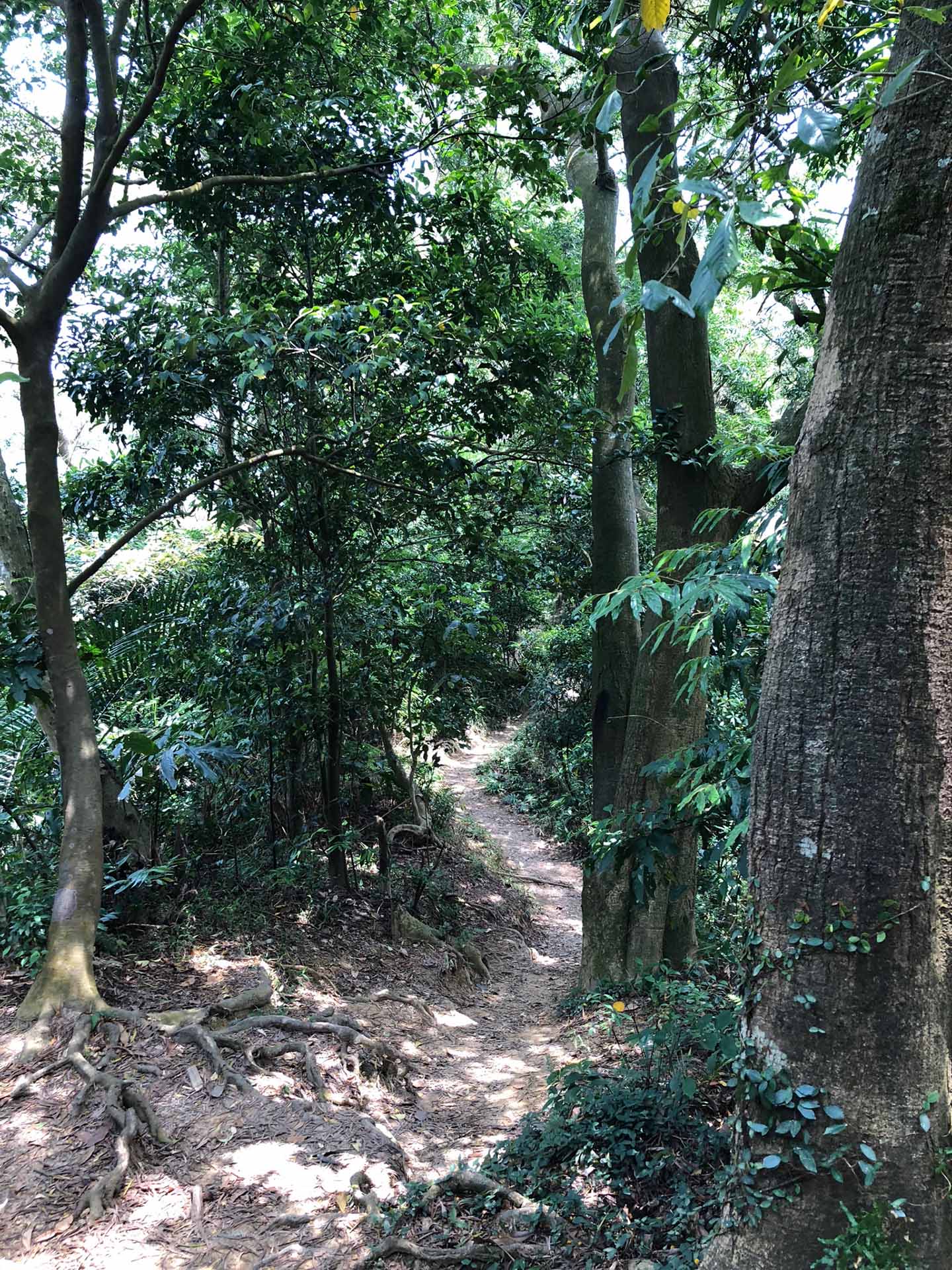 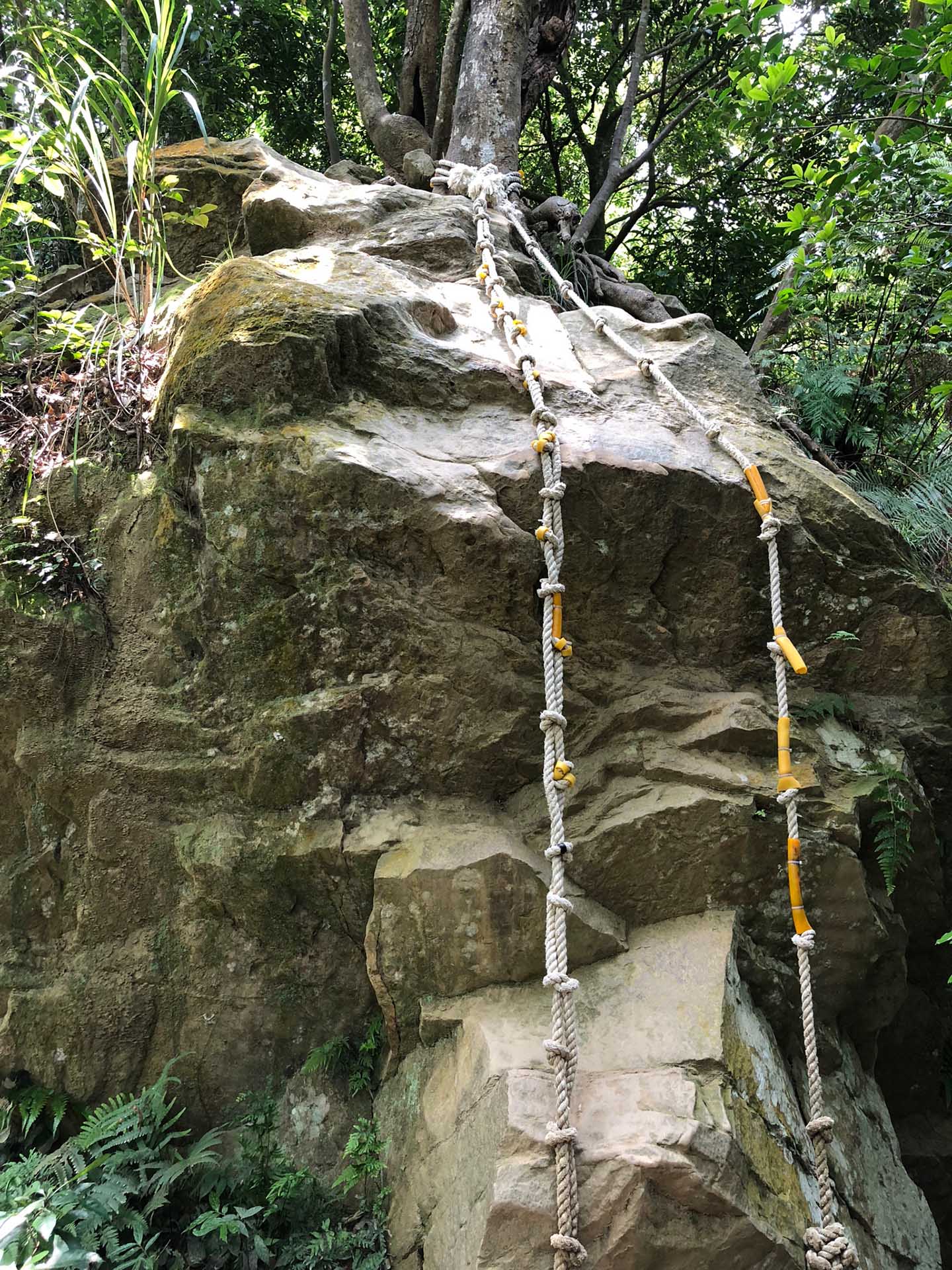 After about 45 minutes of climbing you get to the first intersection (numbered 4). There’s not much to do except realize how far you still have left to go and continue onwards. I was already absolutely drenched in sweat and not sure if I could make it to the top. I can’t say it got easier but I stopped feeling exausted and quite enjoyed the rest of the hike compared to that initial bit.

After about an hour or so of more climbing, you get to a ridge that you have to lower yourself down from. It’s pretty steep and quite far to the bottom but there’s ropes everywhere. Apparently, people bring gloves for this bit but I didin’t find those necessary.

Arriving at the ridge. 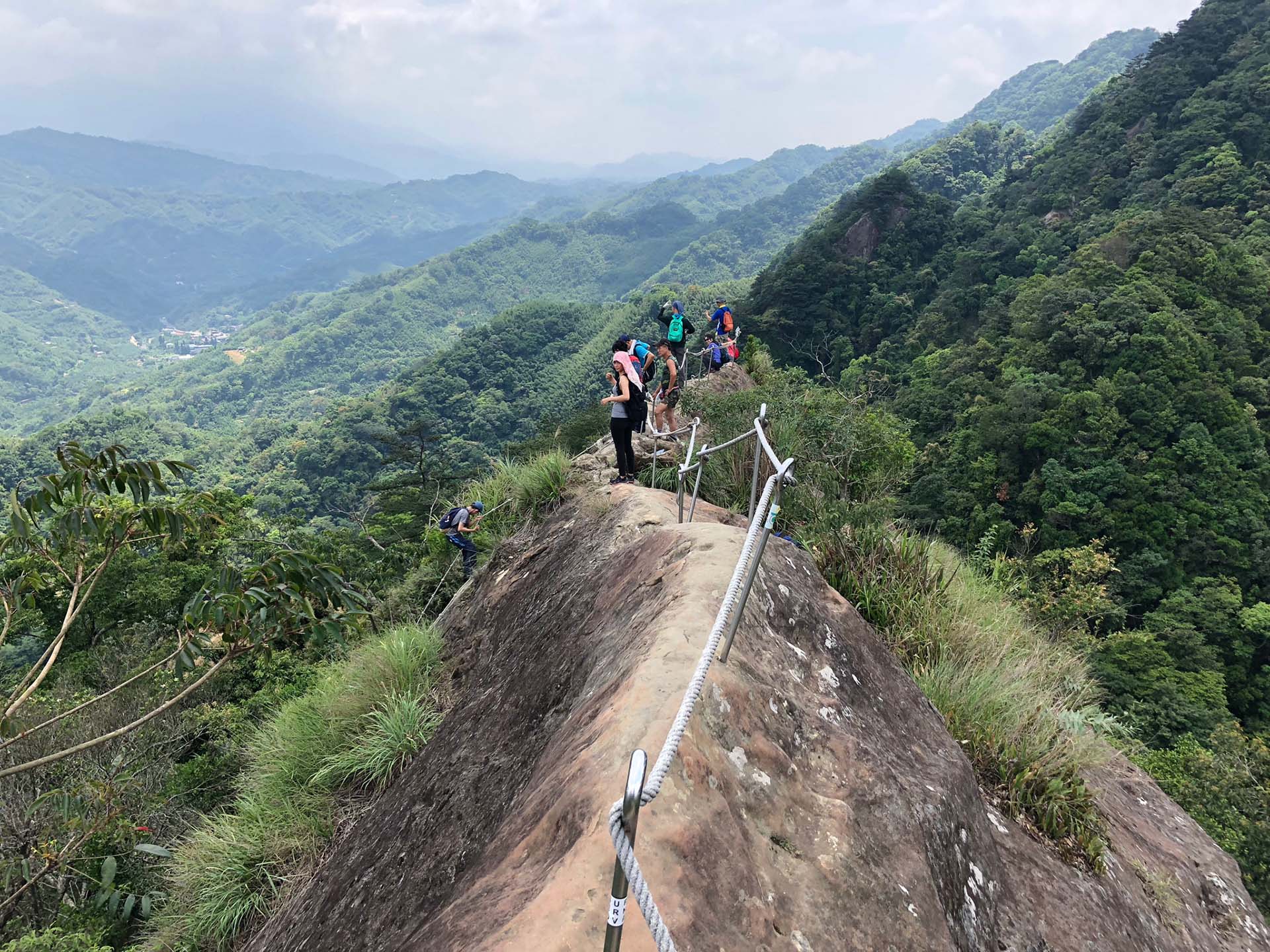 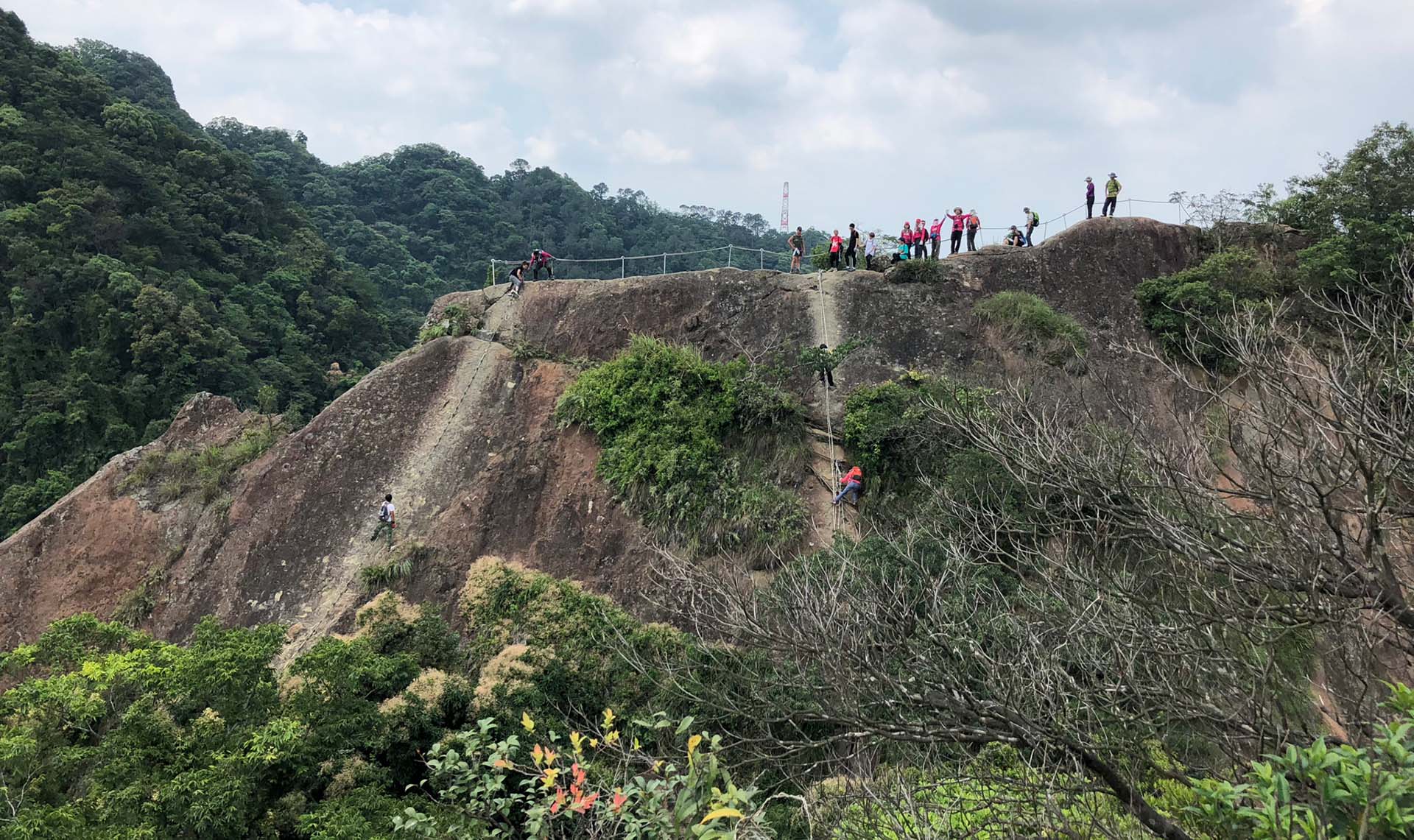 That last picture was taken from a large rock opposite the ridge that the people around us called “Titanic.” You can climb up this rock but you have to take another way to continue towards the peak. It’s probably the hardest climb on this hike but I’d say it’s worth it. We saw a large bird of prey circling above after we made it to the top. 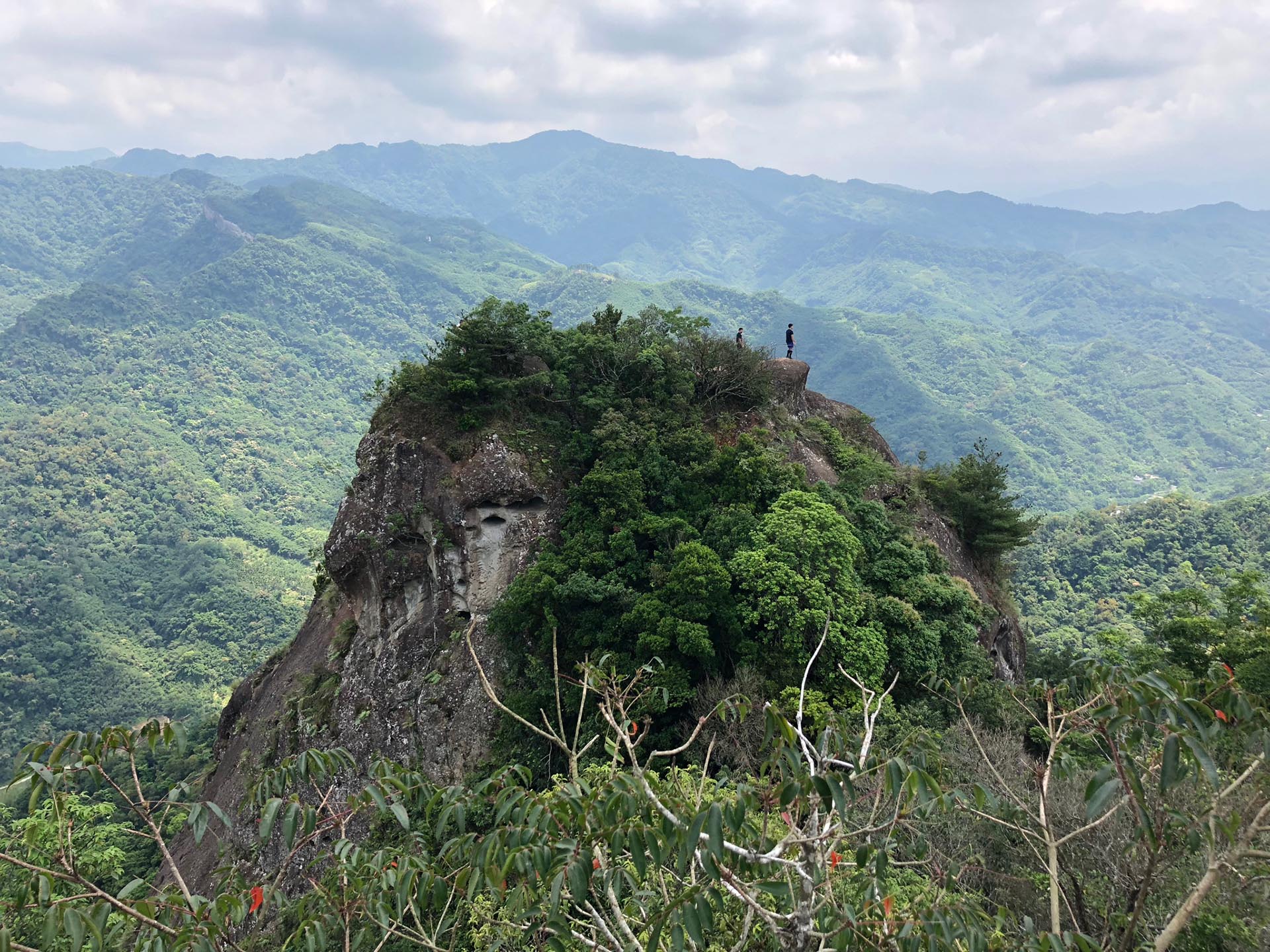 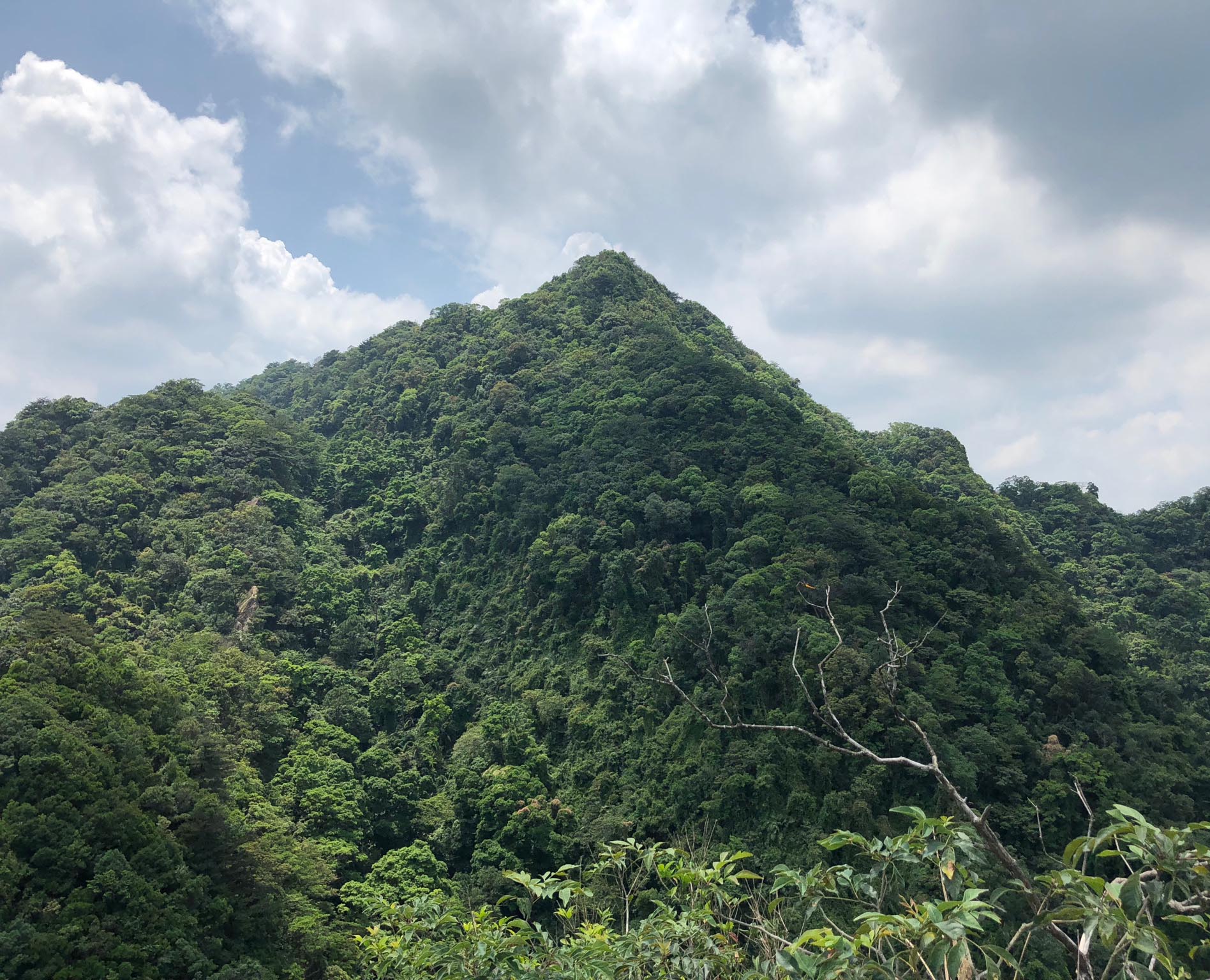 From this point you also have a great view at the peak. Although it looks very imposing from this perspective, it’s not actually that far. On our way towards the final ascent we saw what to me was definitely the highlight of the day: a small pond of rainwater that miraculously hadn’t evaporated, filled with water lilly and a large dragonfly! 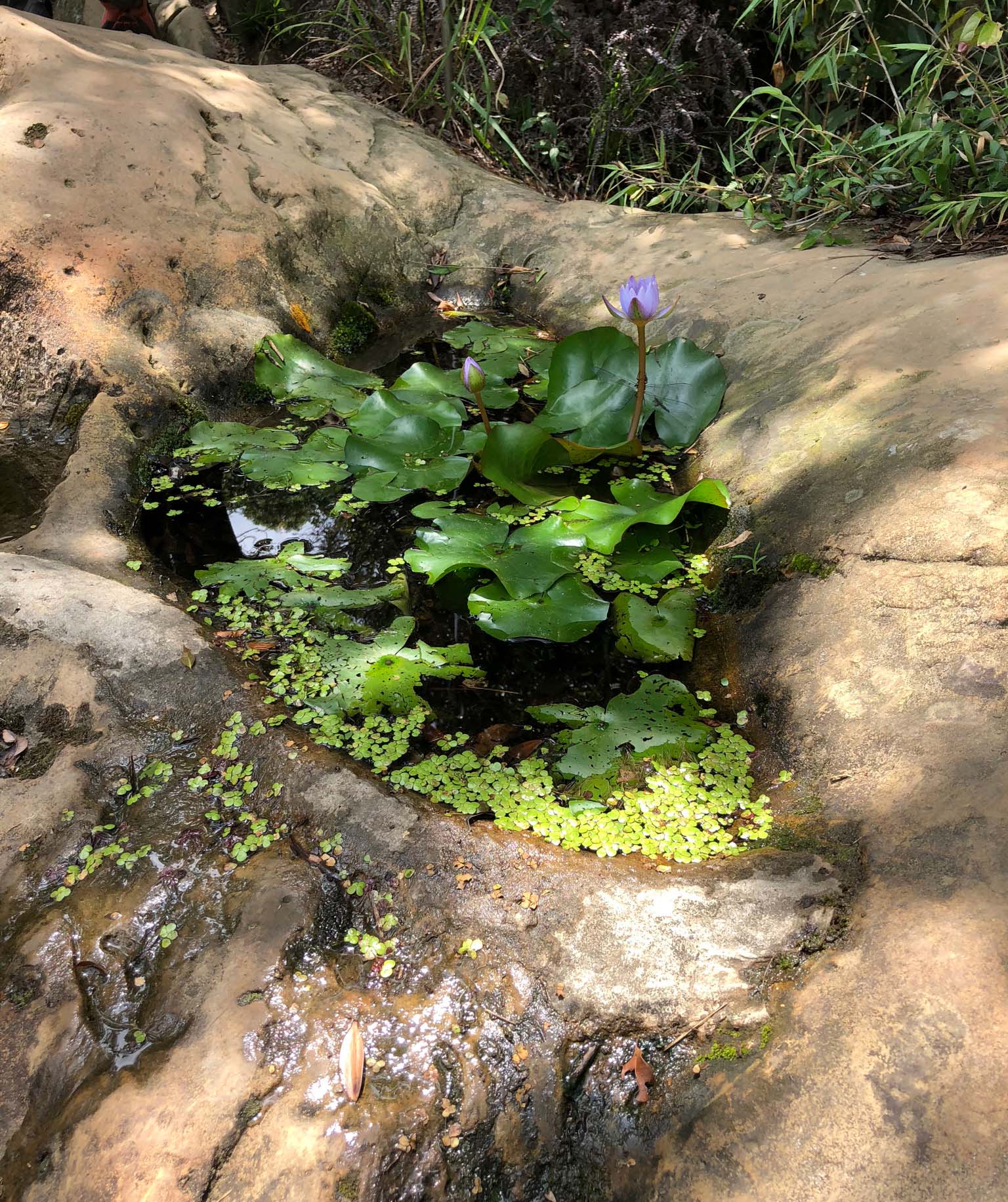 A small pond. Come to think of it, it might actually be a spring which would explain why the water didn’t evaporate. 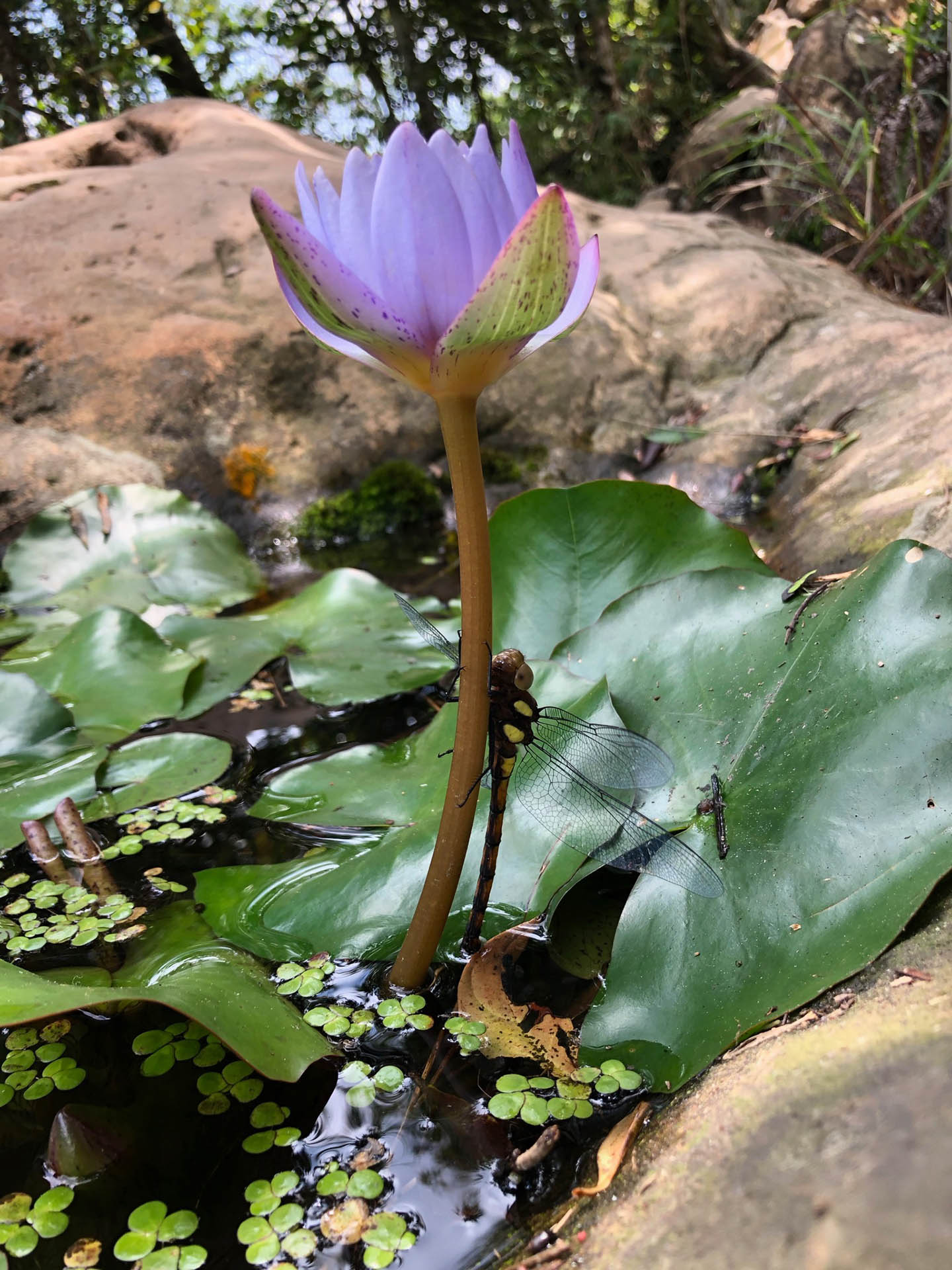 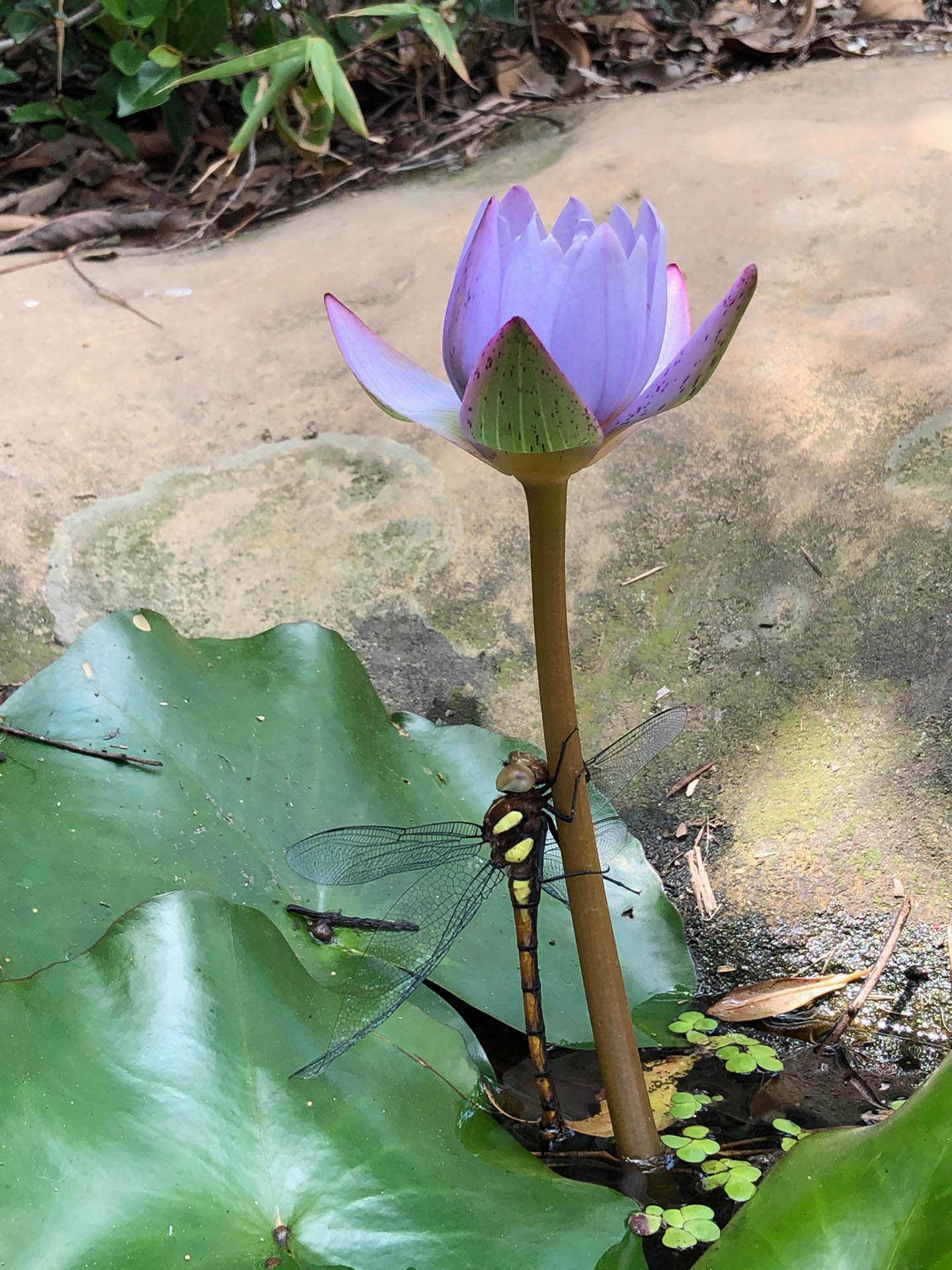 A dragonfly, maybe laying its eggs?

After a short while, you get to the last stop before the peak. It was quite crowded when we got there since you also pass it on your way down. 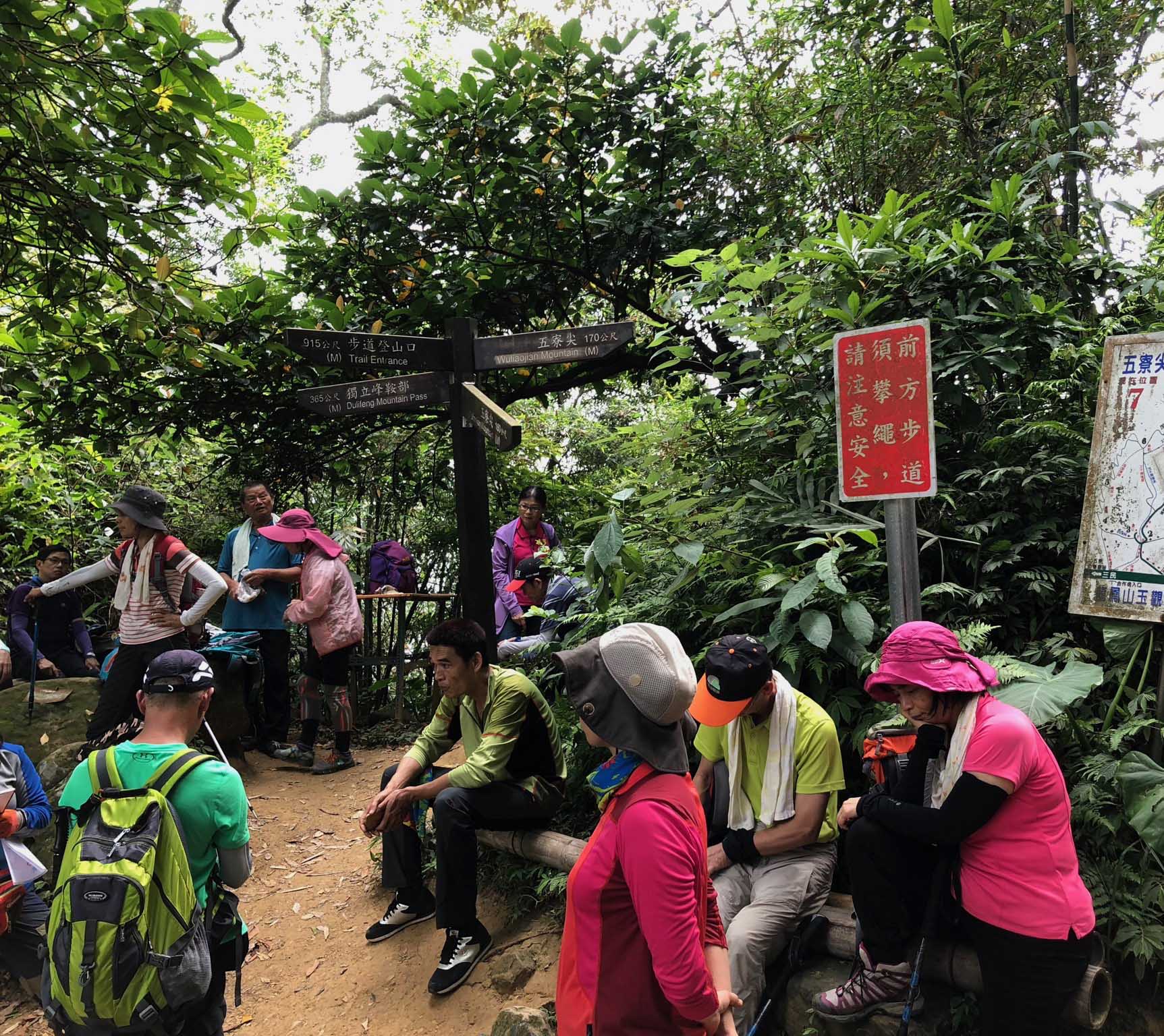 There’s a gigantic tree giving shade to the benches there, I wish there was some way of knowing how old it was. 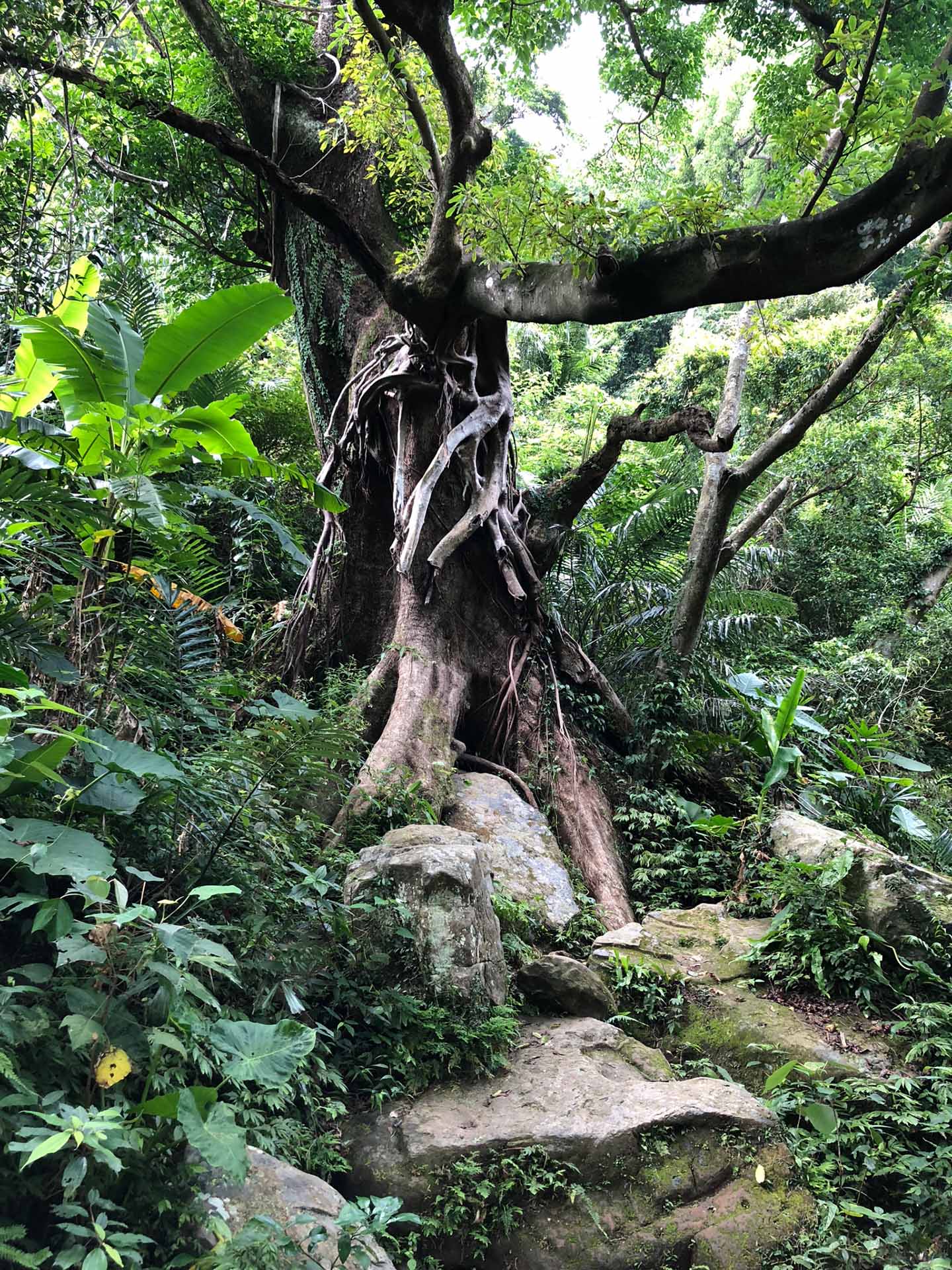 After 15 more minutes of climbing, you arrive at the top. It’s very exposed and on the day we climed it, the sun was blazing down so we didn’t stay for very long. The view is alright but nothing to write home about really. 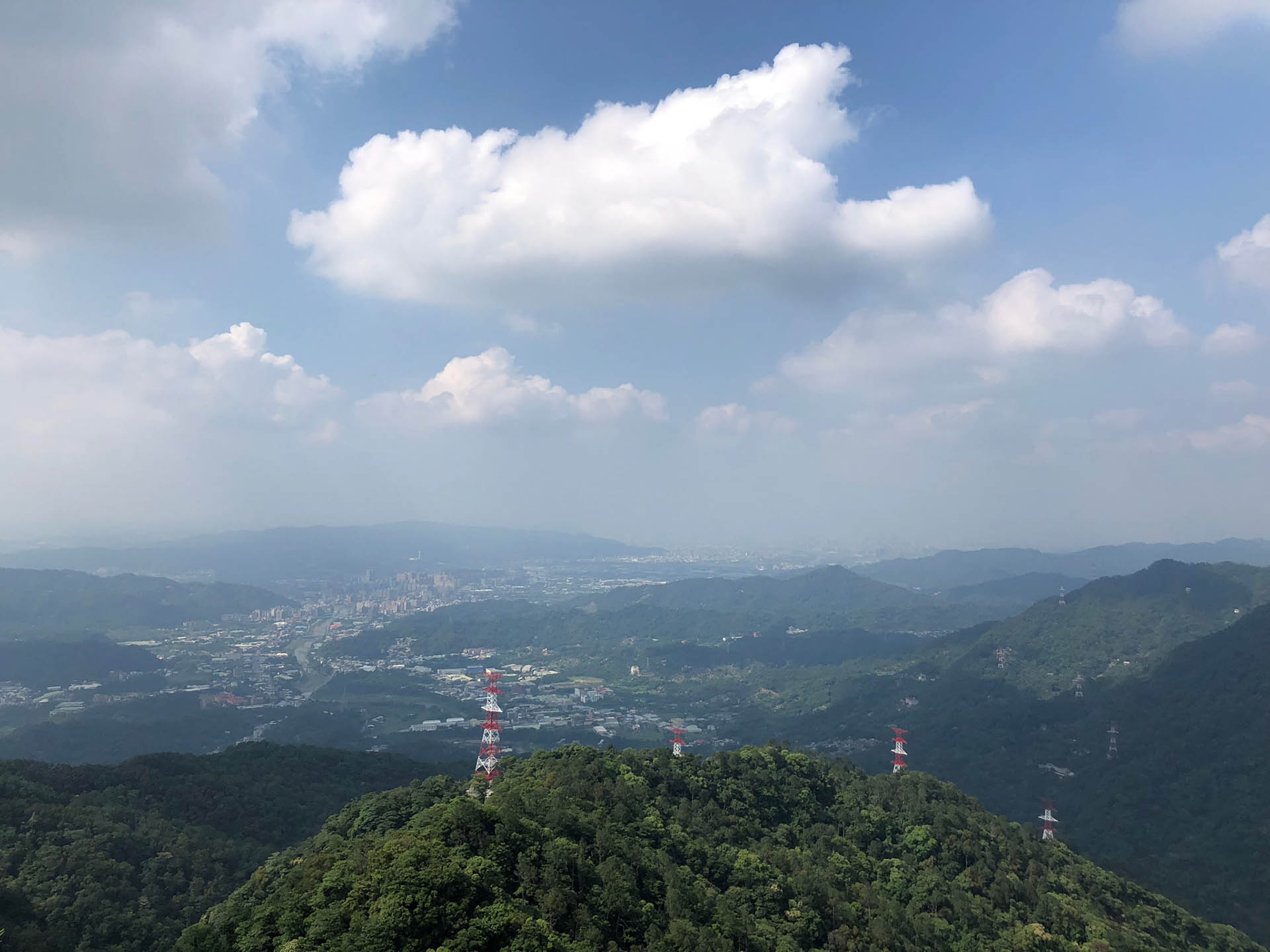 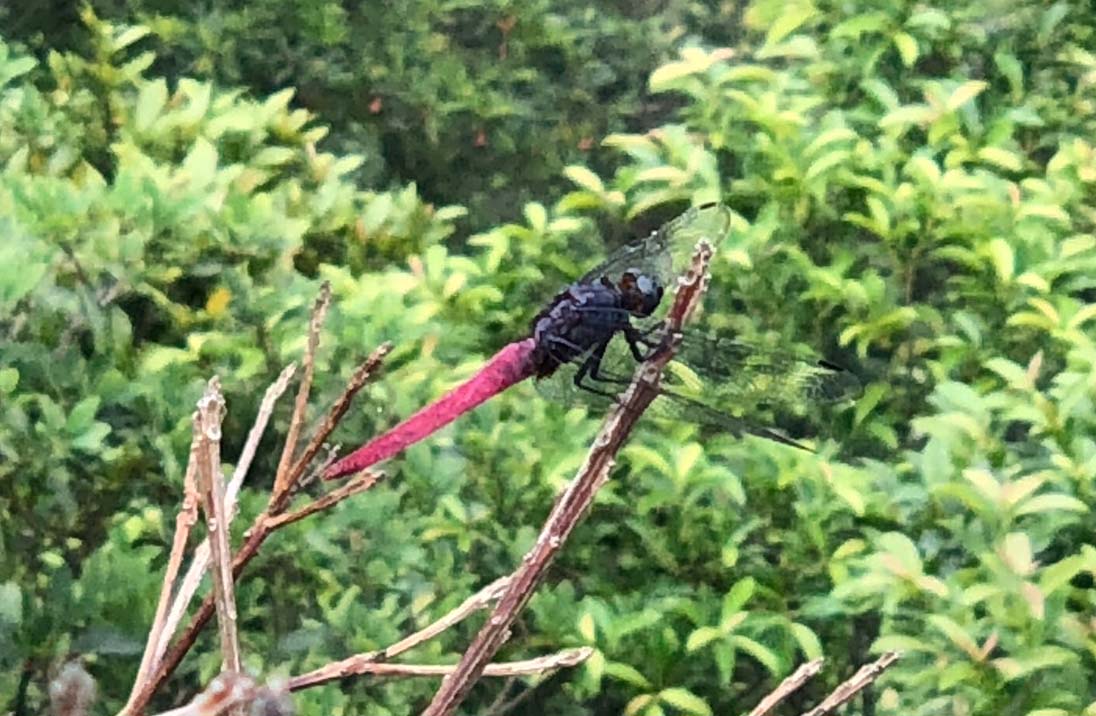 On the way back, we took a different route which was very secluded and almost deserted. The stones were moist which required lots of concentration but I managed to take a few pictures of the forest around us. 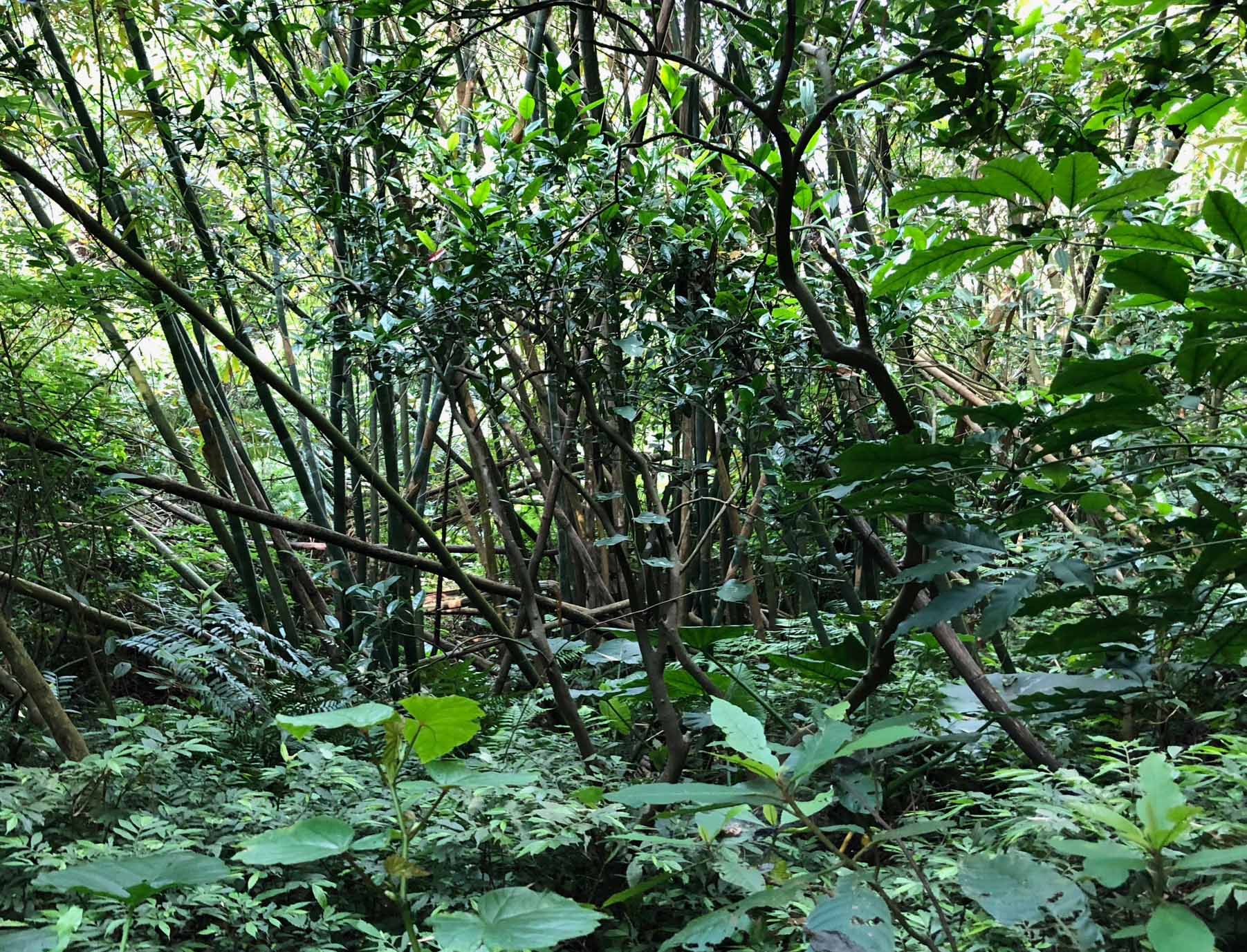 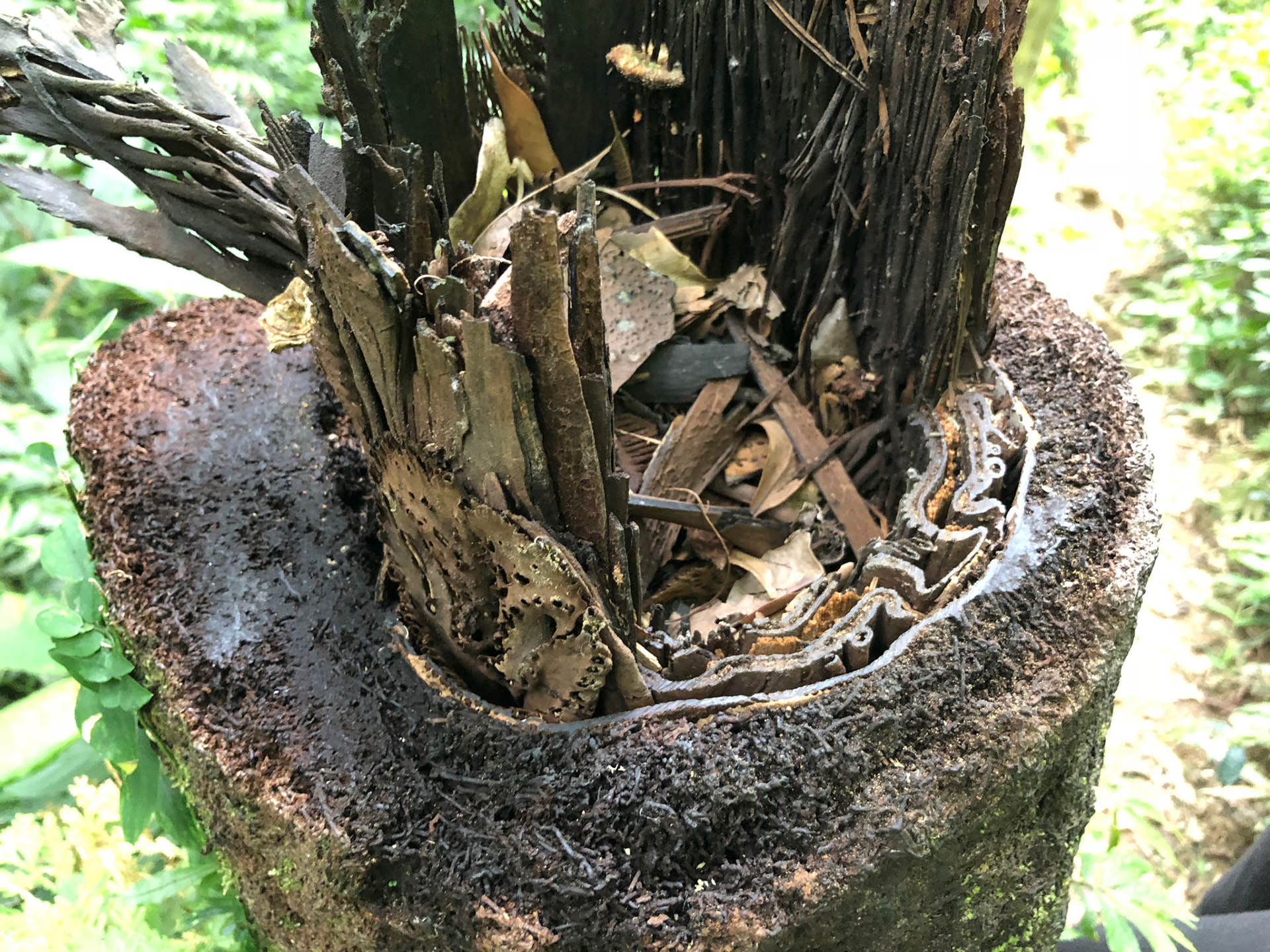 A tree that looks like it was partly cut. 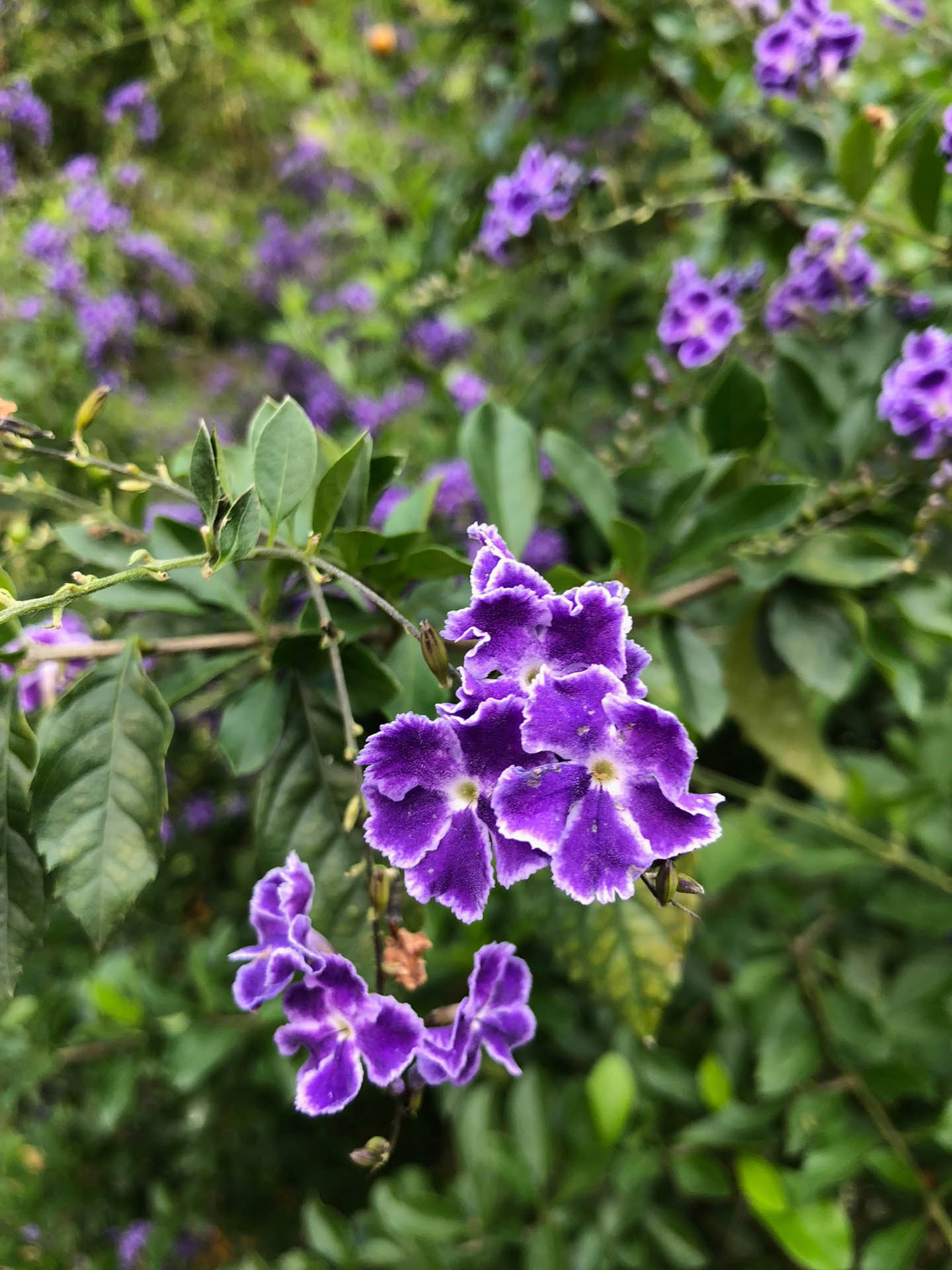 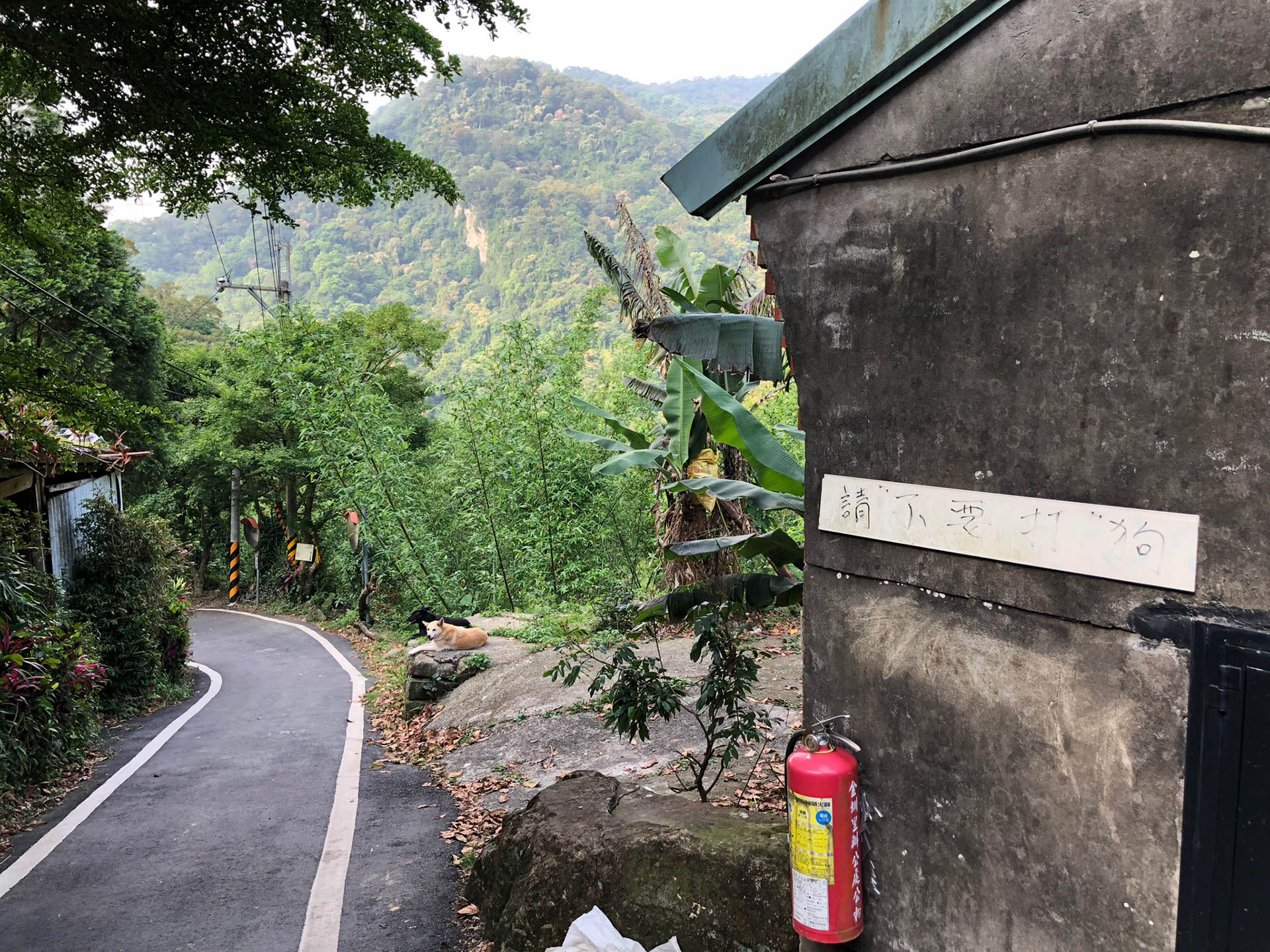 When we got to the end of the hike, there was an abandoned building which apparently used to be part of the mining operations in the area. A middle aged Taiwanese man who was also on the way to the main road told us that he’d grown up in the area and that he remembered the mining from when he was younger. He also showed us coal lying around on the ground which was cool to see. It really was everywhere but I would never have noticed if he hadn’t told us.

He also said something about all the steel being sold off to Beijing to build the bird’s nests for the Olympics but I didn’t quite catch that part. 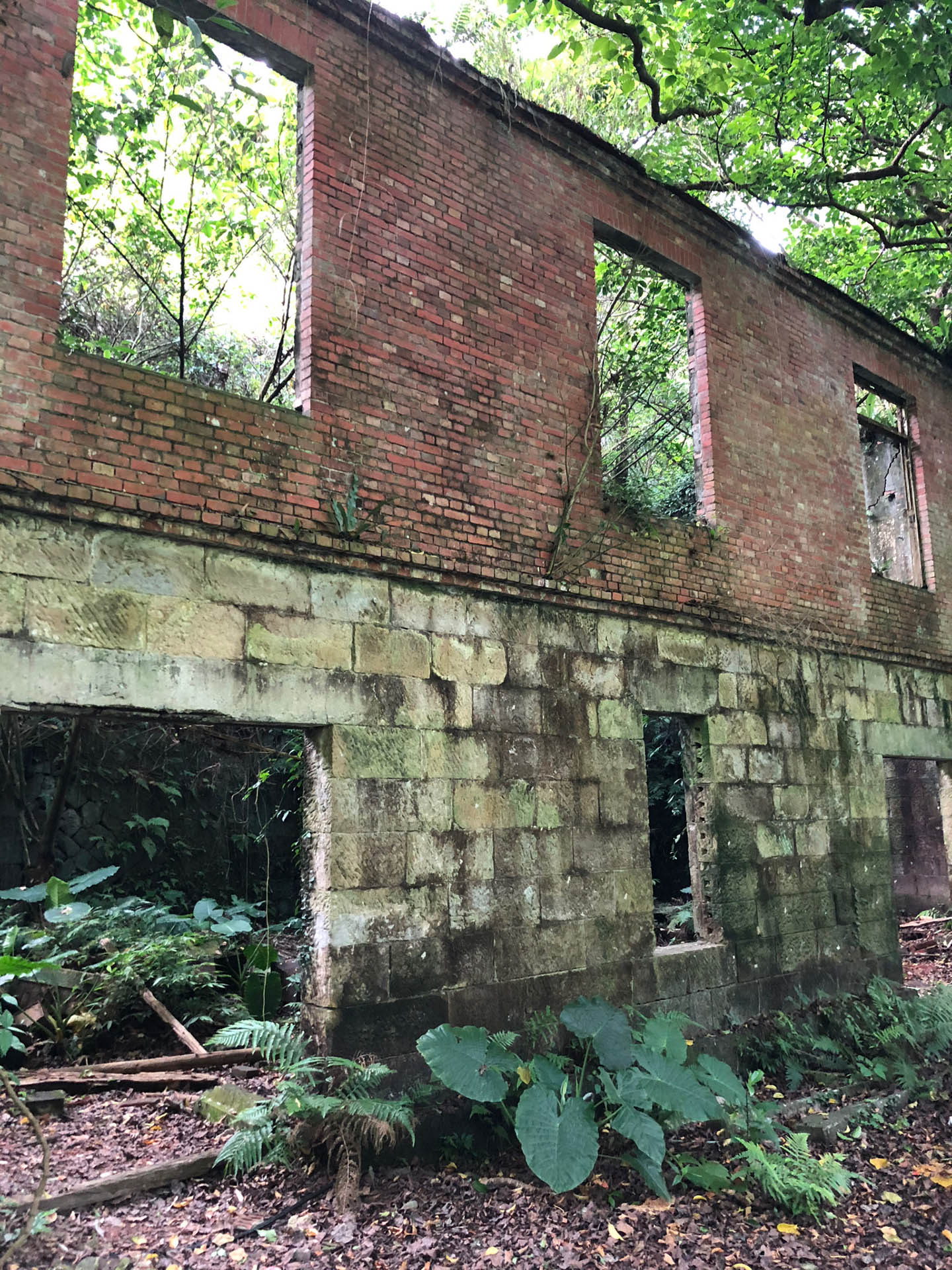 The remains of a mining office? 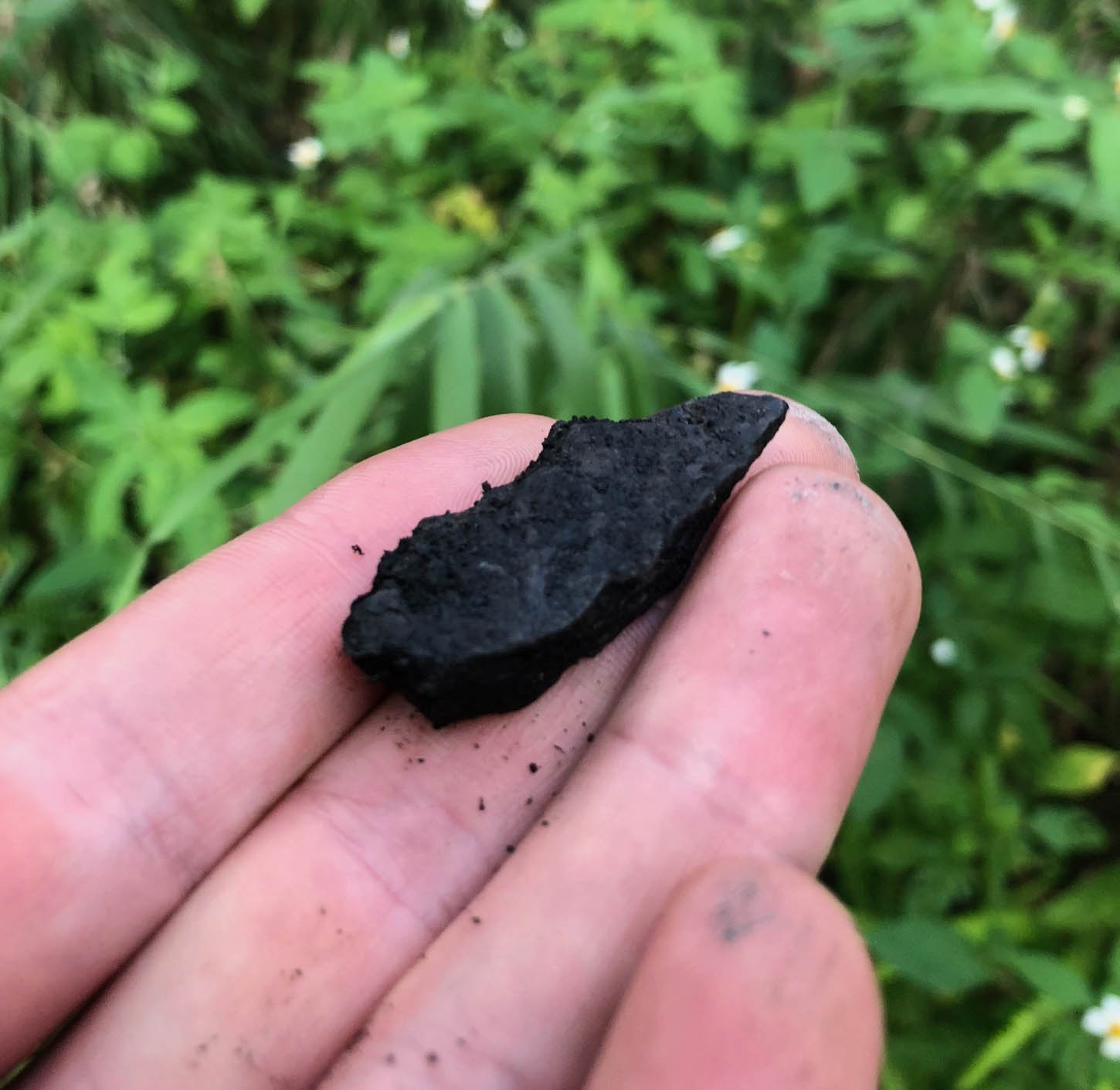 Overall a great but very demanding hike. Definitely bring enough water and protection from the sun if you decide to go!