My friend Katie invited me to go hiking with her and her game night friends for Labour Day. Someone in their group had planned a trip to Bitoujiao so that’s where we went. I’d been to Chahushan (茶壺山) two weeks earlier with Alan (still got pictures from there albeit not very good ones, maybe I’ll write a review for that trail later) which, as far as I can tell, is pretty much adjacent to Bitoujiao so I’d been in the general vicinity. 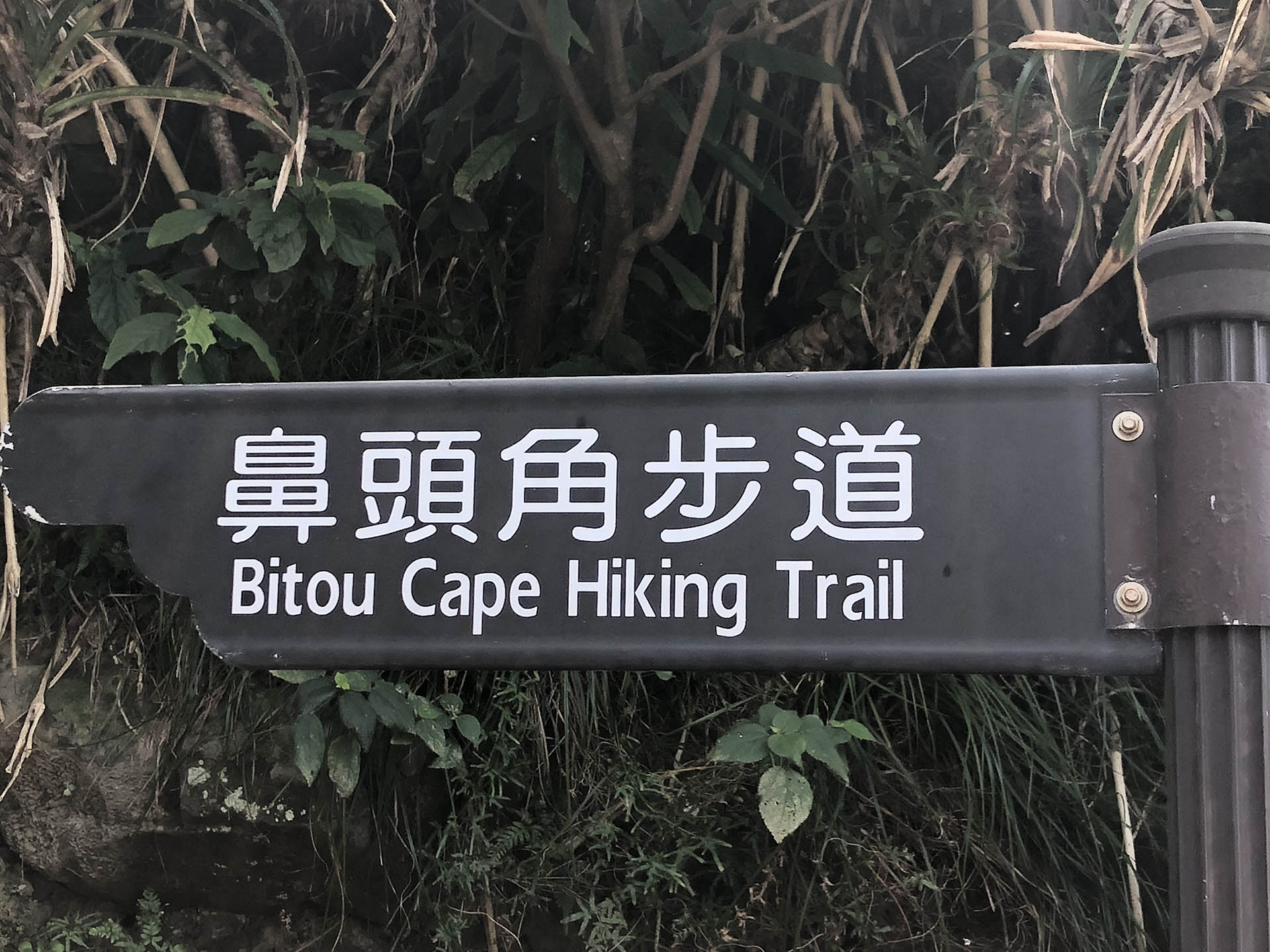 We took the train to Ruifang and a bus from there which dropped us off directly in front of the beginning of the trail. It wasn’t very hard to get to but it’s a little bit further away from Taipei so make sure to plan accordingly. 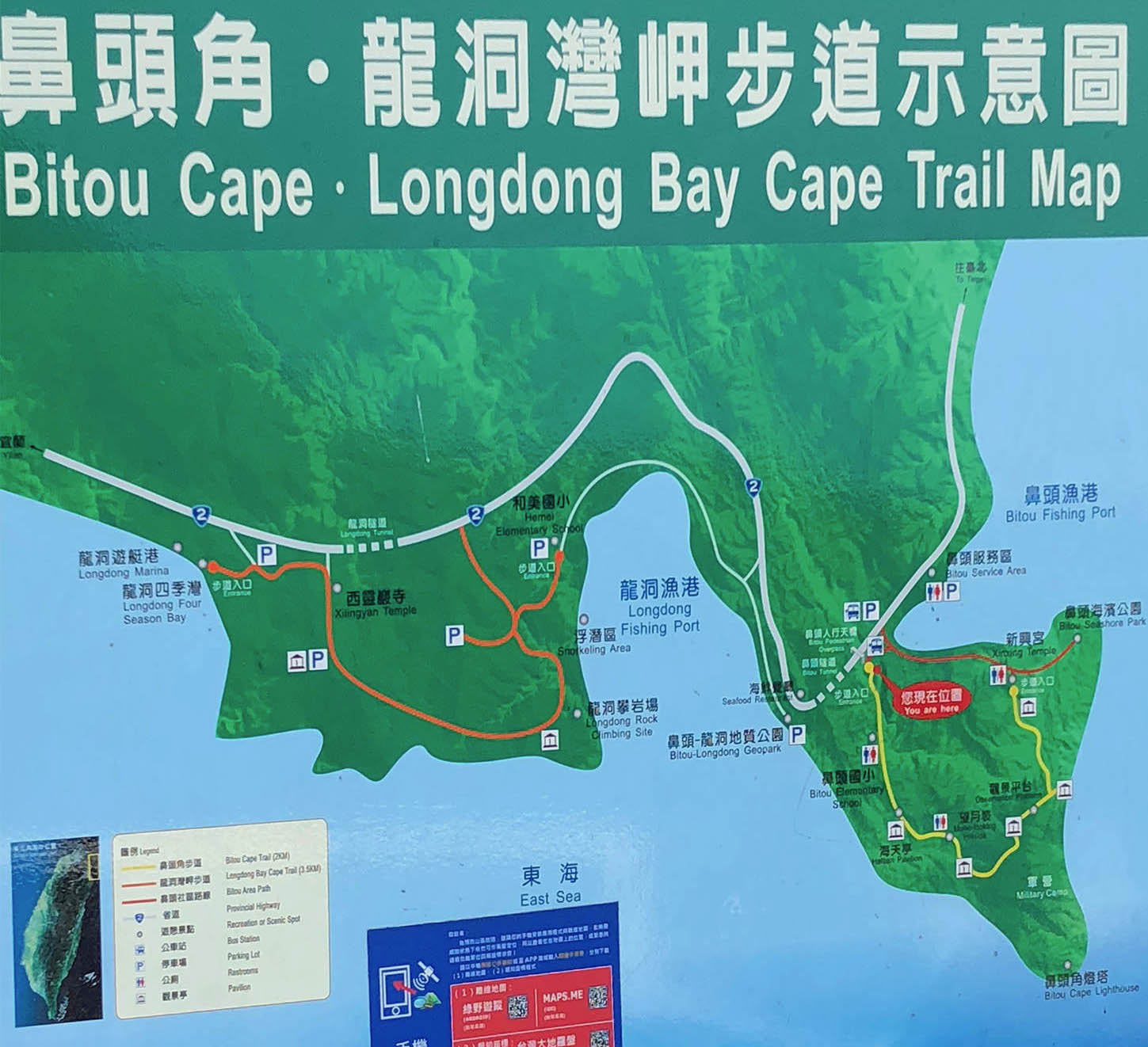 A map of the trail. We hiked the yellow bit in the bottom right.

The hike starts off with some up and down before you get to the first hill. For some reason that I couldn’t figure out, the start of the hike was very crowded when we went, but the end was almost empty. 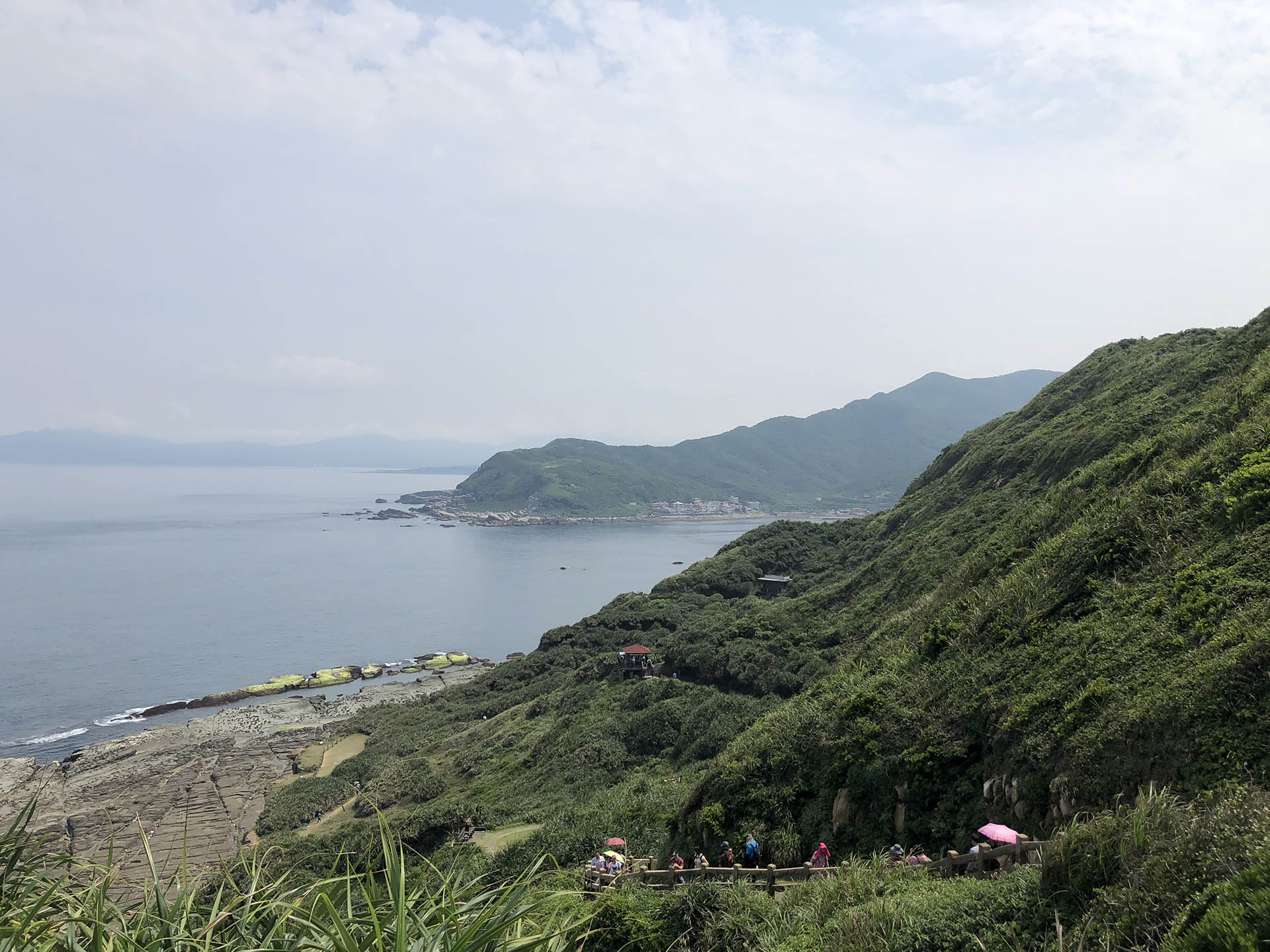 You get a nice view of the sea and some interesting plants. 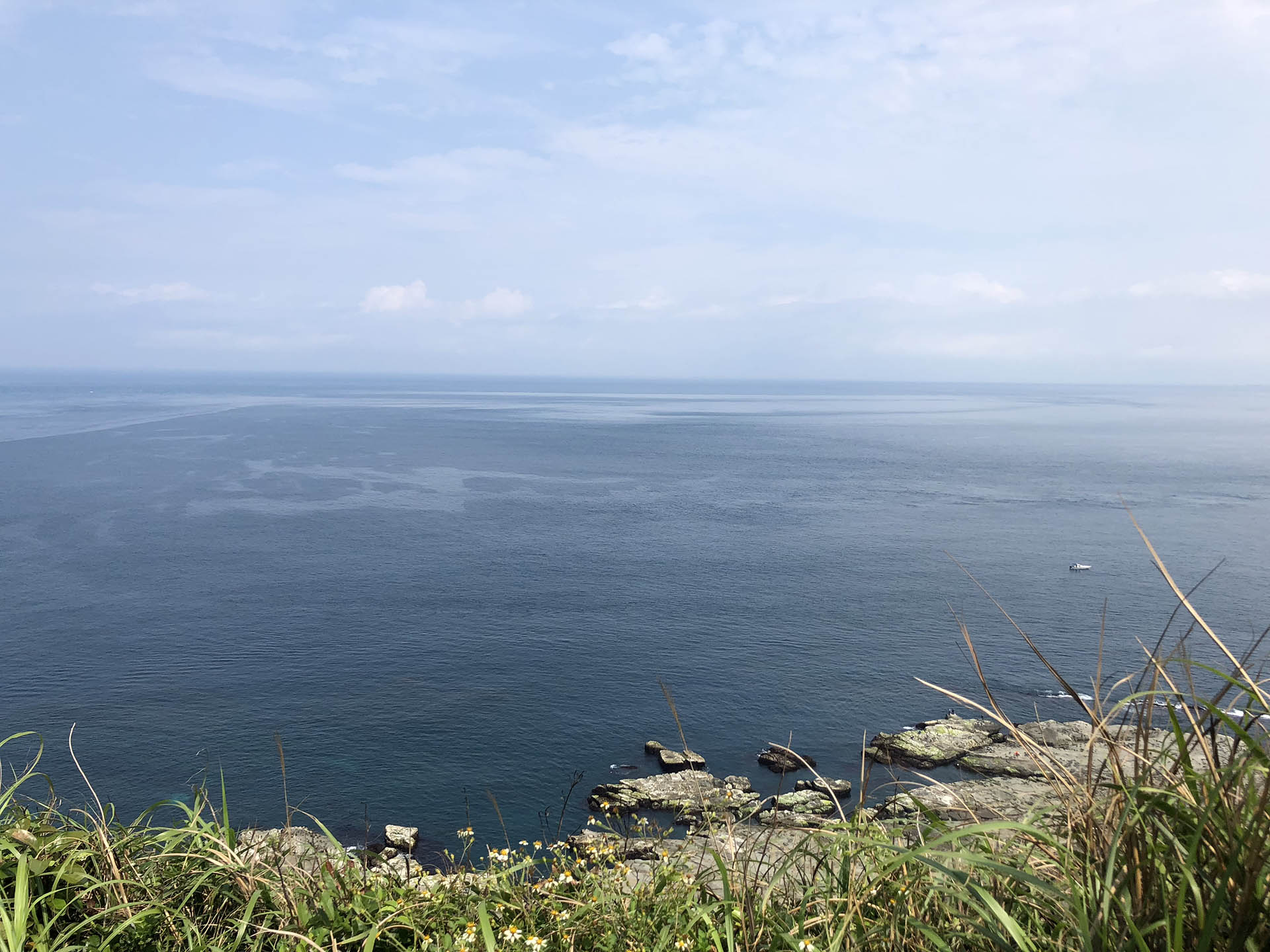 On your way up the first hill, you’ll see a military base on the right. It looks quite mysterious but also means this hike probably isn’t ideal to try out your new drone. The map shows a lighthouse on the other side of the hill that the military buildings are on but since your view is obscured by that hill, you can’t see it from the trail. 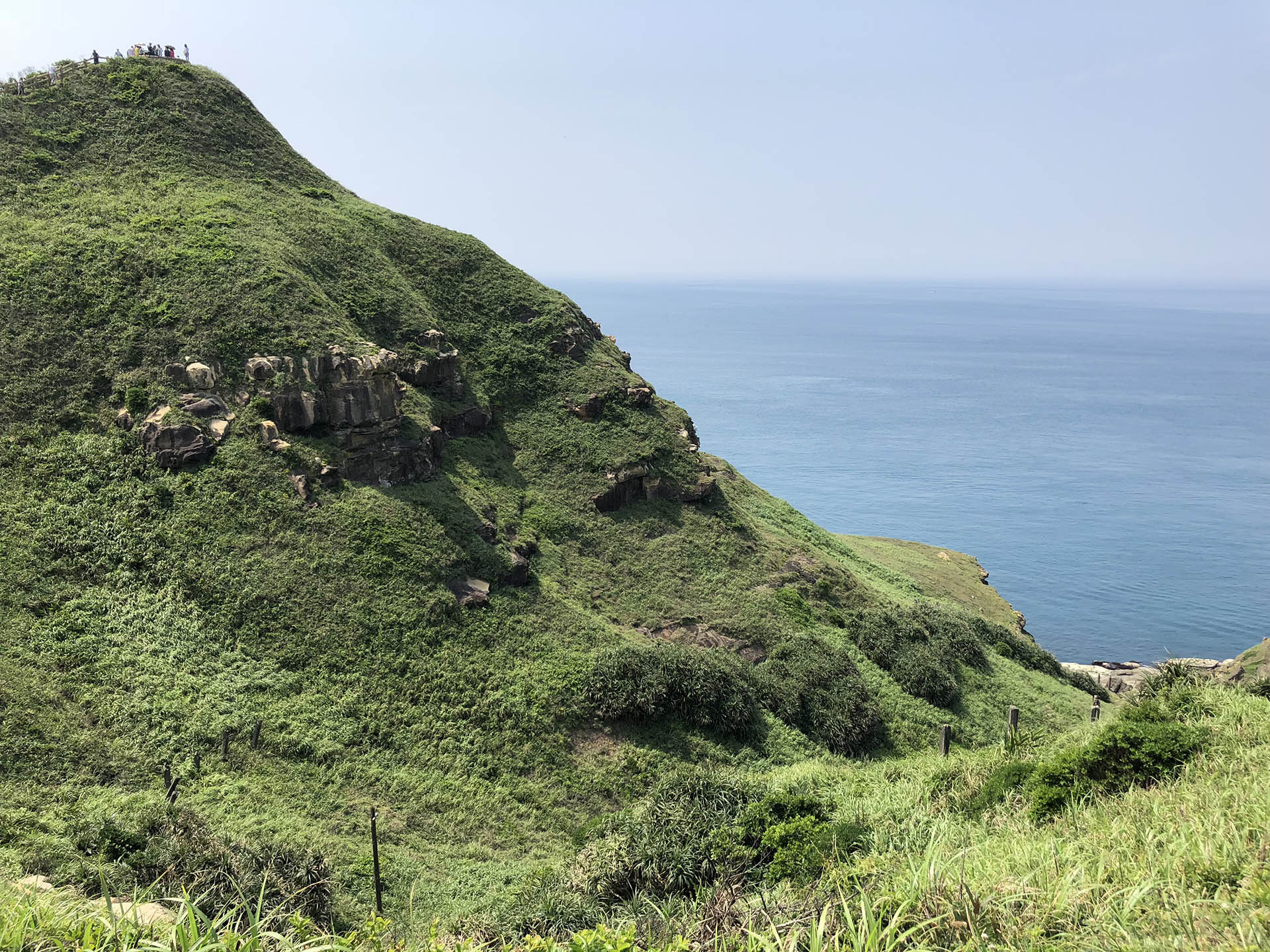 We did however get to see a bird of prey glide around the hills which was quite captivating to watch. I didn’t manage to take a good picture of it but you can see it on the left on the picture below. 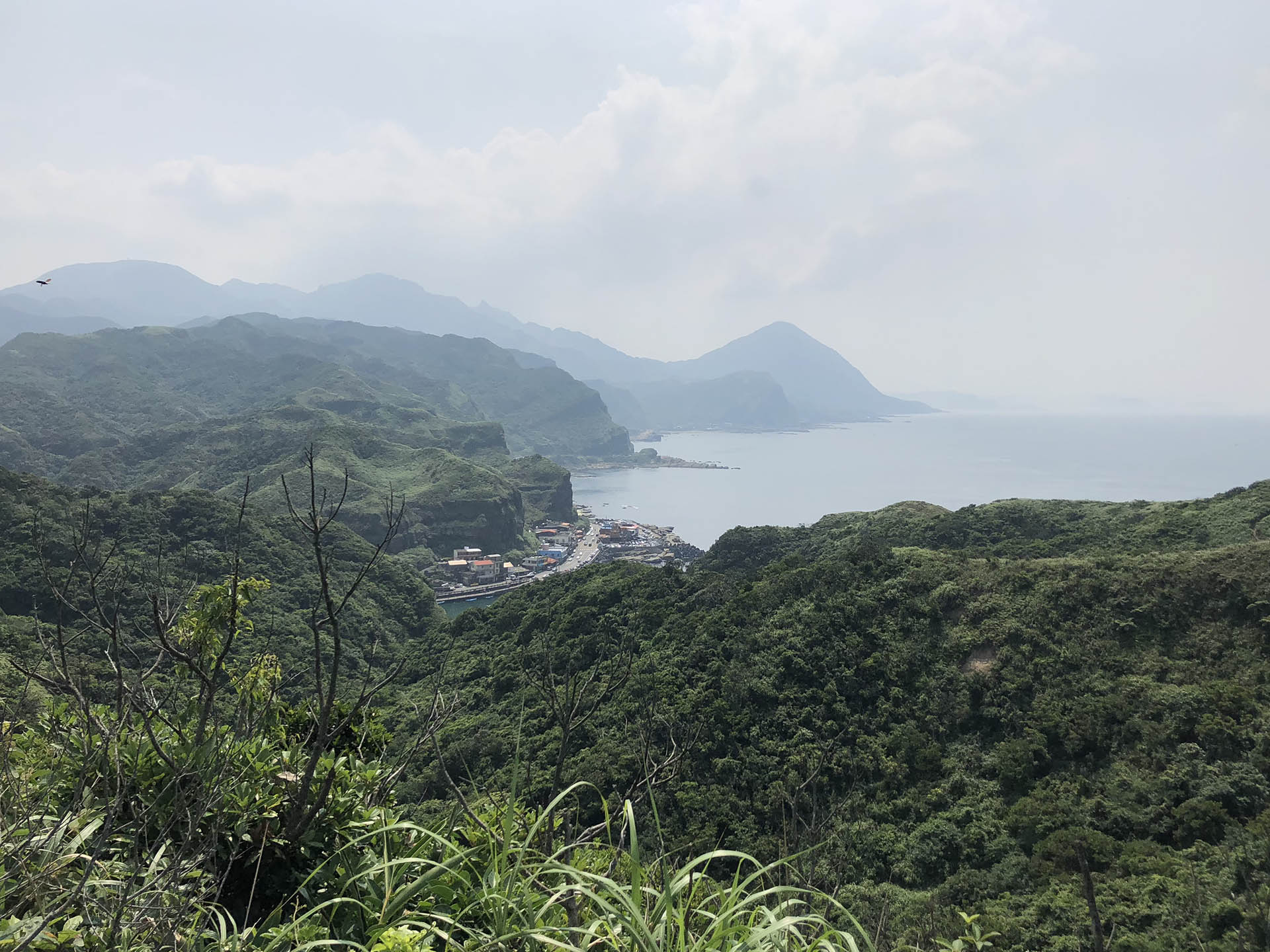 Bird on the left.

Once you get to the top of the first hill, you walk along the ridges between a few more hills and peaks. There are small pavilions or places to sit and rest everywhere. As you can see on the pictures, this part is completely exposed, there’s no trees to shade you from the sun. We and everyone else were drenched in sweat since it was a very sunny on the day we went so definitely remember to bring enough water, sunscreen and an umbrella if you’re into that. 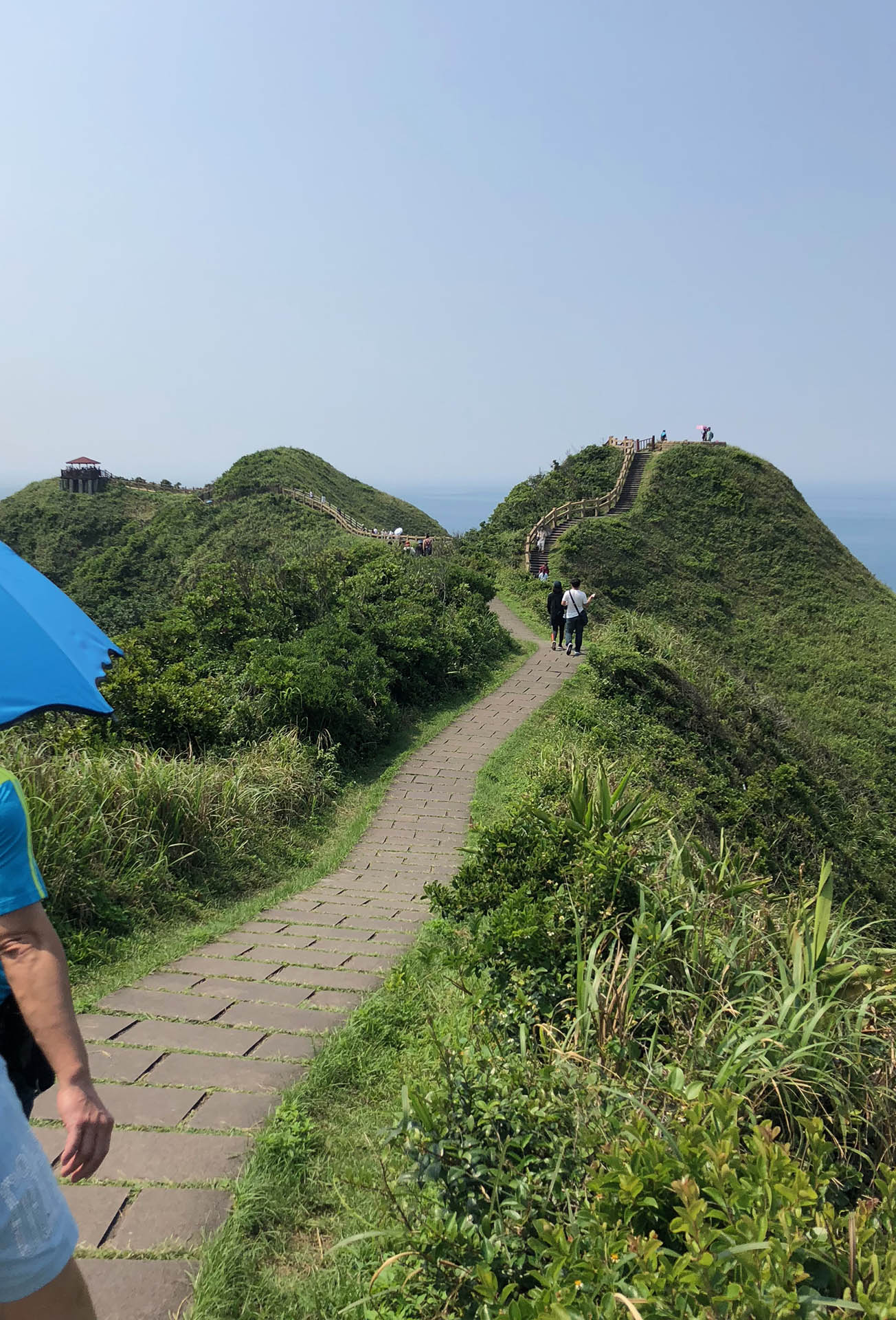 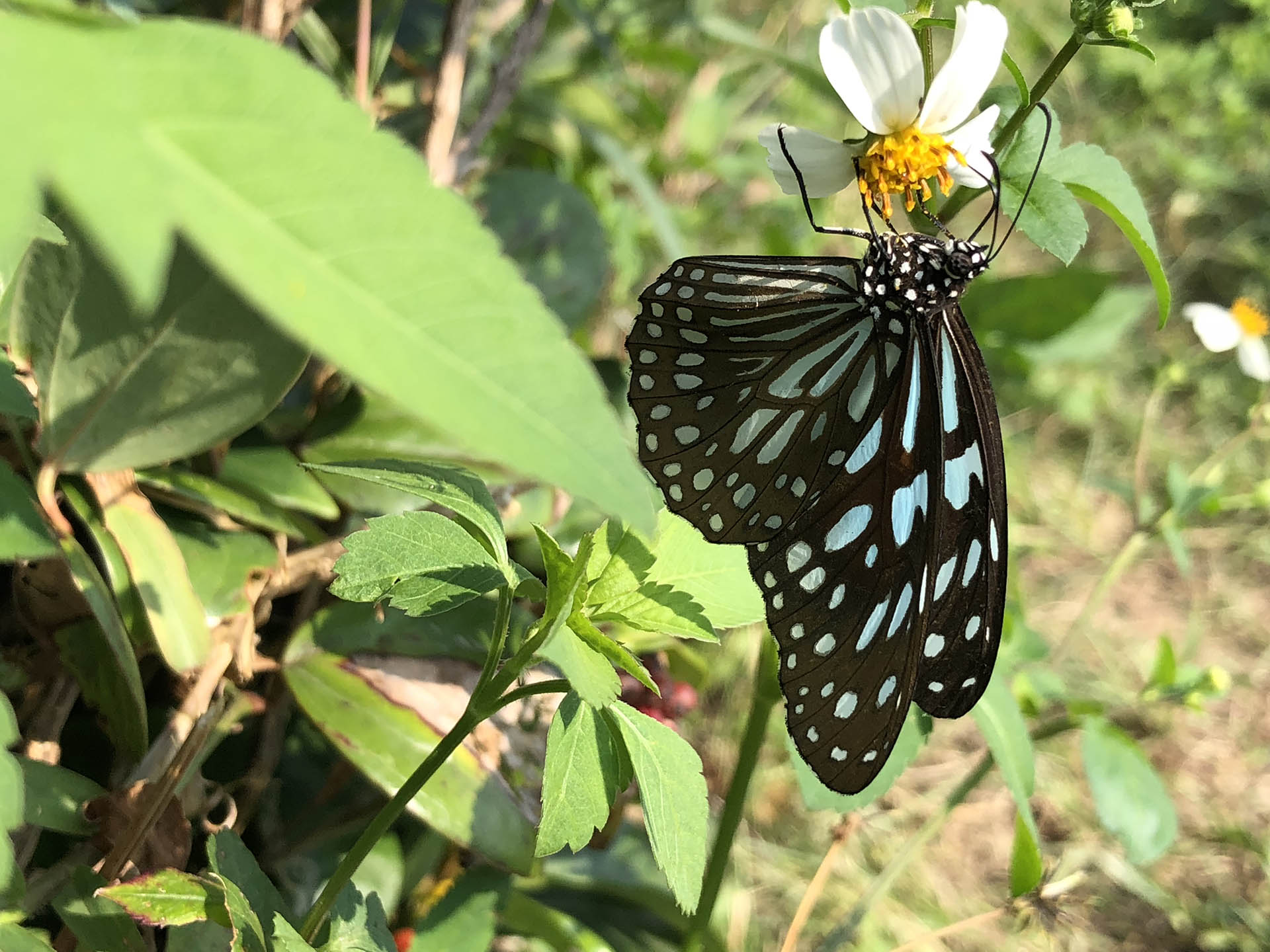 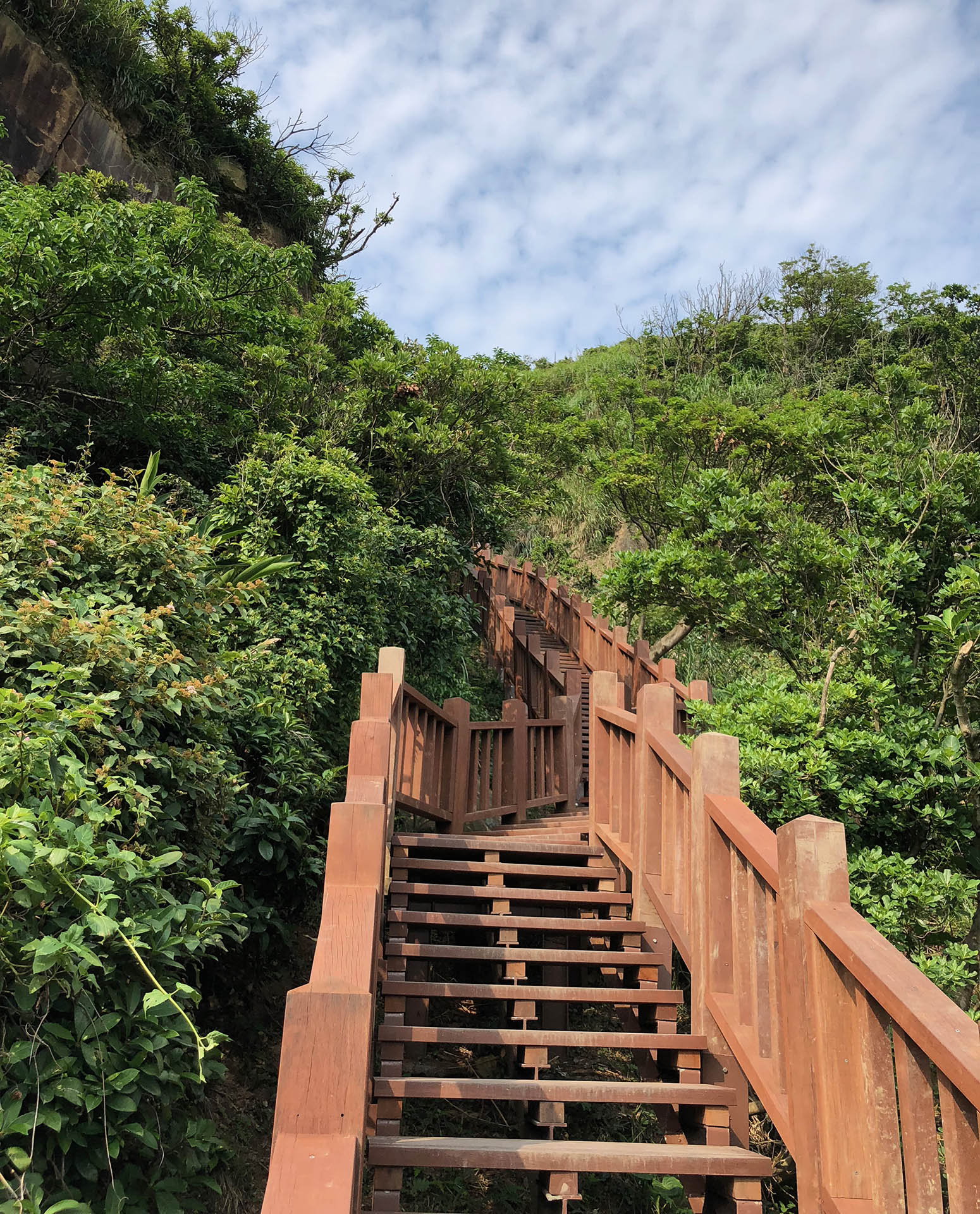 The trail ends in a harbour with some buildings built around it. You can take pictures of the fishing boats, as I did, but besides that, there’s not much to do there except go to the toilet and get to the bus stop. 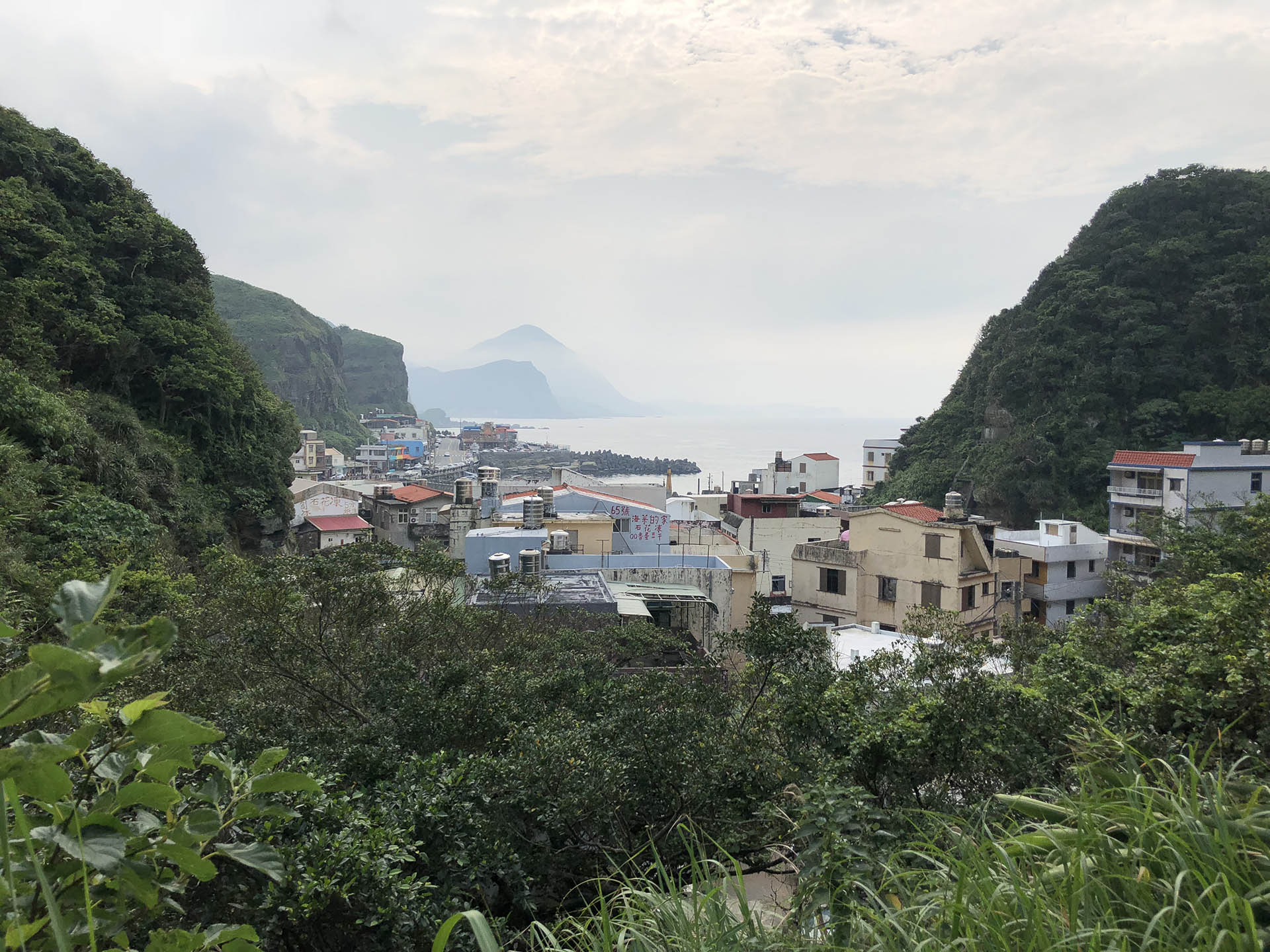 Ugly village in the front, beautiful mountains in the back. 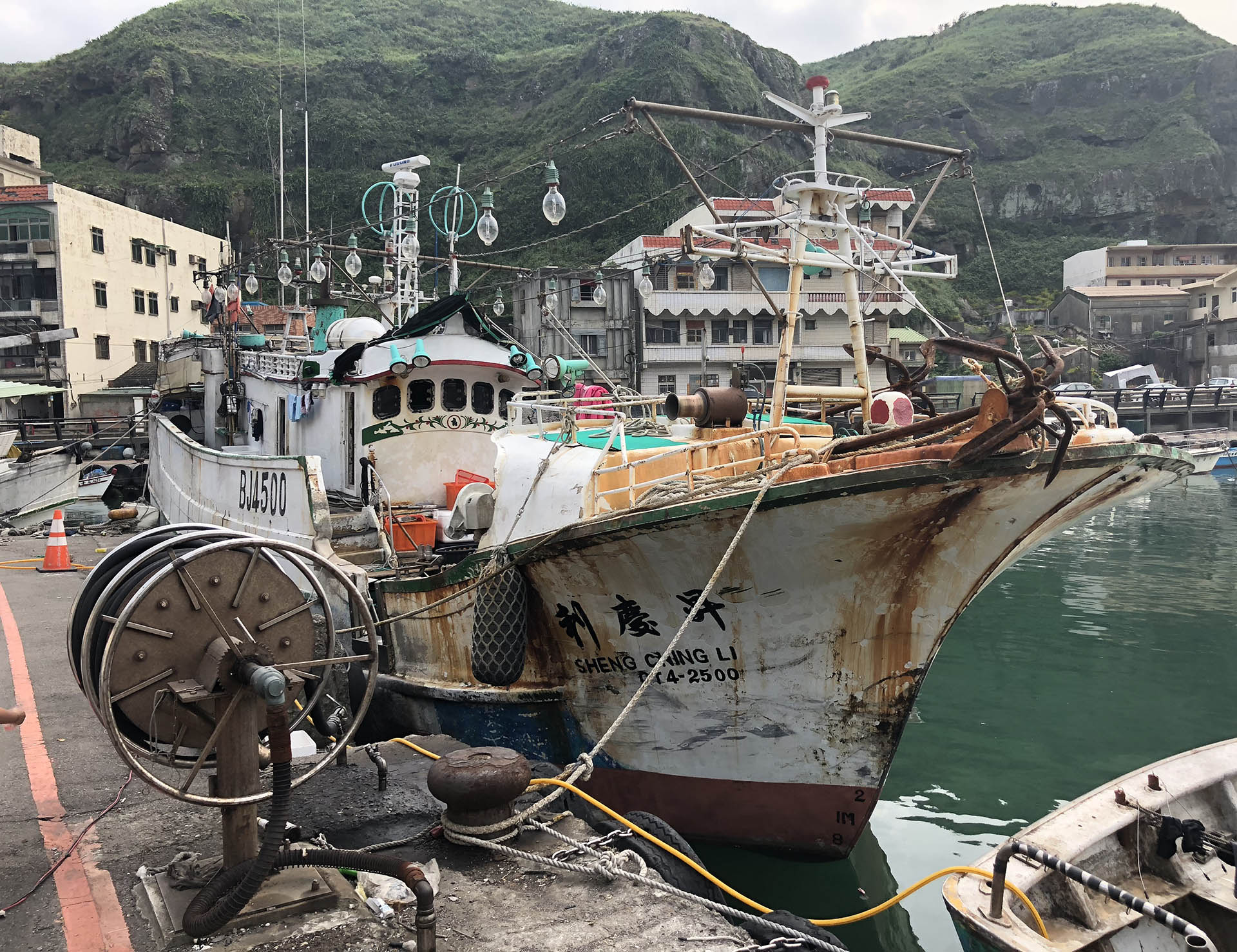 Bitoujiao is a very well developed, easy and relaxing hike with some great views. I’d say it’s suitable for almost anyone so it might be ideal if you want to get your friends into hiking (not that I’d know anything about that since I’ve been the one who’s been freeloading off other people’s motivation to plan and organize trips). It’s very short though, so definitely plan something for after if you’re coming all the way from Taipei. Maybe a visit to the Keelong night market or to Jiufen.