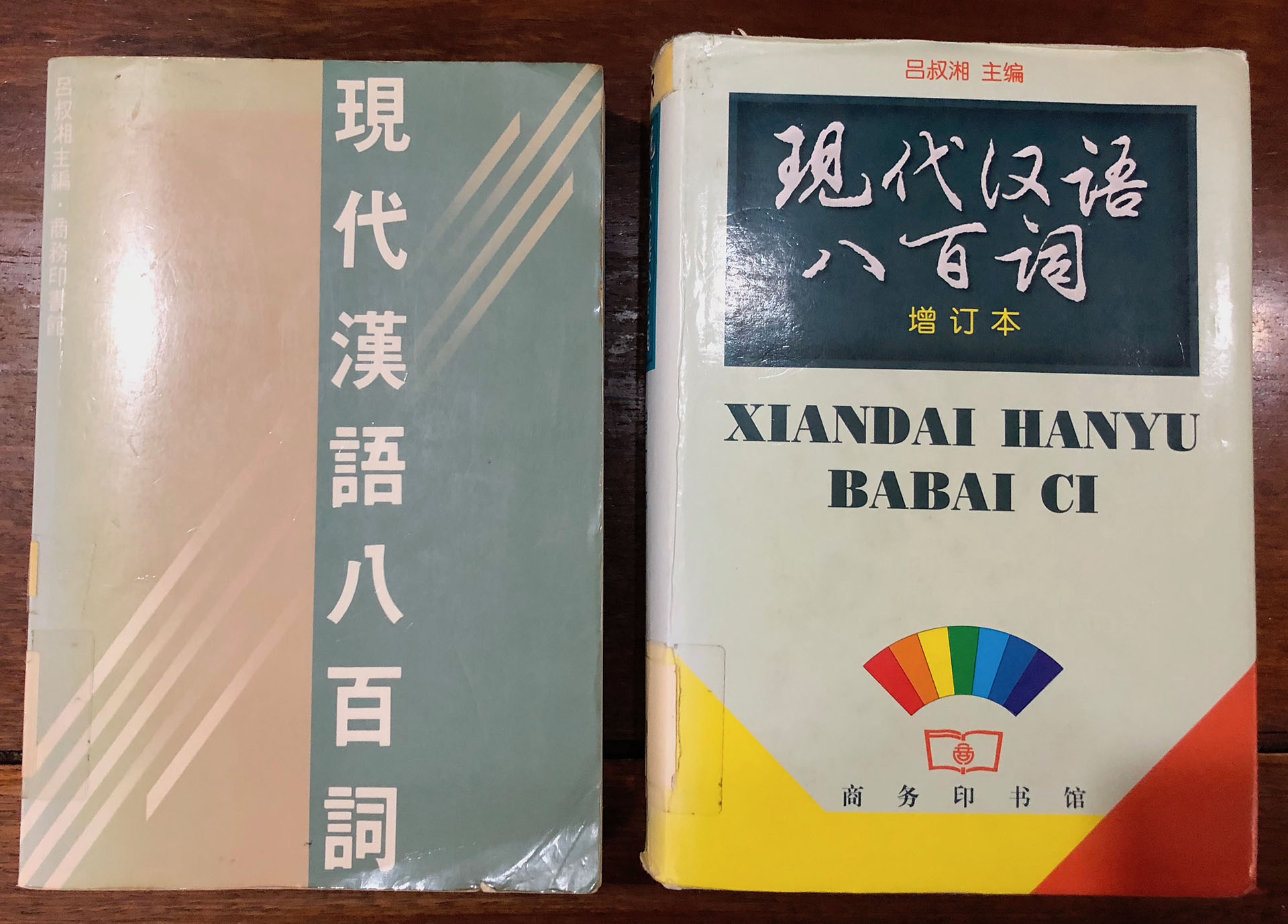 An older edition from Hong Kong on the left and the mainland Chinese edition on the right.

Welcome to my new book review series. As evidenced by this blog’s archives, I’m great at sticking to a regular blogging schedule so this is the first of what will surely be hundreds of reviews to come.

Anyway, today’s book is called 现代汉语八百词 / 800 Words of Modern Standard Mandarin by 吕叔湘 and a bunch of other people. I was recommended this book by my friend who studies linguistics at Peking University and according to him, it’s one of the main references used by linguists in China. It’s part of a series of books on Chinese published by Commercial Press with green, yellow and red covers. It’s fairly ugly but most of the books from that series I’ve looked at seemed to be of high quality. These books are meant for Chinese people, however, they are not text books for learners of the language. This means you have to have to be able to read Chinese and have at least foundational knowledge of grammatical terms. It also means there is no dumbing down of concepts that might overwhelm a beginning student of the language: this is the full story, unredacted, the square root of -1 of studying Mandarin.

As the title suggests, “800 Words of Modern Standard Mandarin” contains explanations and examples for 800 Chinese words, most of which are 虚词 or function words, i.e. words that carry little meaning of their own and mostly fulfill grammatical purposes. This includes all the favourites, like 了、就、的/得/地 and so on that us learners of the language struggle with. In fact, I would say that most of the difficult aspects of Chinese grammar is contained in these function words and their usage, which makes clear explanations of them both hard to write and extremely useful. 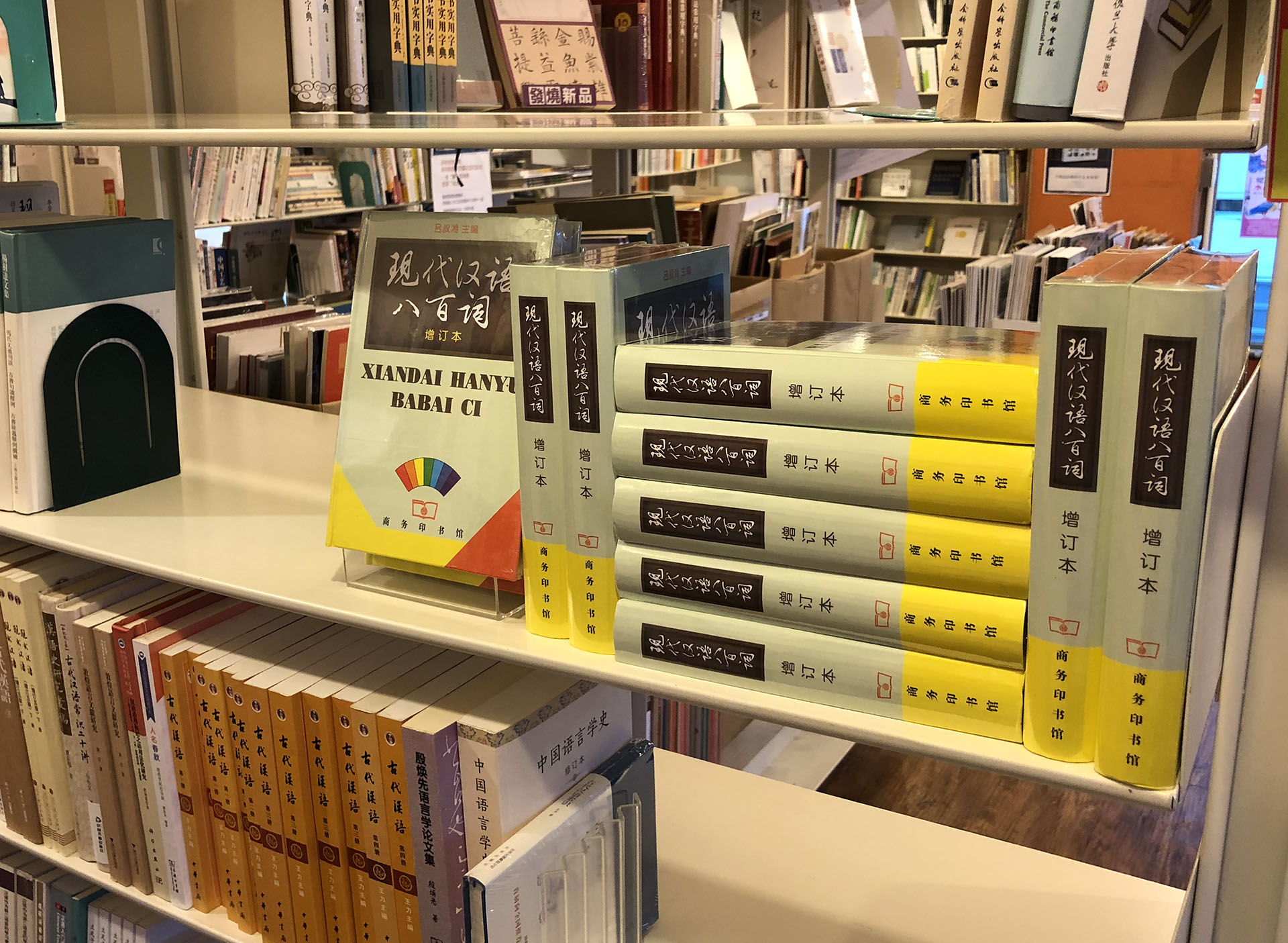 现代汉语八百词 being featured prominently at 若水堂, the Mainland import bookshop next to NTU.

This book delivers on that. The first thing to note about it is that it’s incredibly comprehensive. The entries in this book go way beyond the three sentence explanations you get in most text books. 了, for example, is given seven and a half pages of definitions and example sentences, branching out into all the shades of meaning contained in it.

To give you an idea of what the structure looks like: the two-page entry for 呢 is segmented into four different meanings:

Most of these are in turn is sub-segmented into differences within each general meaning. Taking the first meaning of 呢, being a question particle, as an example, the sub points are (all with example sentences):

The format is similar for all entries and not terribly easy to navigate. To locate a particular meaning you are looking for, you often have to read most of the entries for that particular word. This is maybe the biggest grief I have with this book: as great and useful as it is, it would be even greater if the information in it was displayed in a more scannable and graphically well-structured format. All you really get is some basic indentation and a slightly smaller font for example sentences.

Before the main section, the book starts with a chapter entitled “Main features of Mandarin Chinese grammar” which is about 40 pages long. It’s worth reading and is similar in content to Zhu Dexi’s “Handouts on Grammar” which I’m planning to review in a future post.

The book ends with a table of measure words, notes and more tables on verb and adjective reduplication (new goal: hearing someone say “香乎儿乎儿的” in the wild) and an index. As far as I can tell, there is no traditional version of this book, it seems to be simplified only (even the edition from Hong Kong shown in the photo above is only traditional on the cover, the inside is simplified).

If one day, after you’ve mastered Mandarin, you decide to learn Japanese, one of the books you will see recommended everywhere is All About Particles. A handy 150 page paperback, it’s essentially like a condensed version of “800 Words of Modern Standard Mandarin” except for Japanese. I wish a book like that existed for students of Chinese with all the clarity and precision of “800 Words of Modern Standard Mandarin” but without going into all the detail. Maybe a 现代汉语八十词?

Until that book has been written, I fully recommend investing 60 RMB and getting this book. I made heavy use of my copy writing the Primlo foundation course and I can guarantee that you will have to get very far in your studies before this book stops being able to answer your questions on Chinese function words.